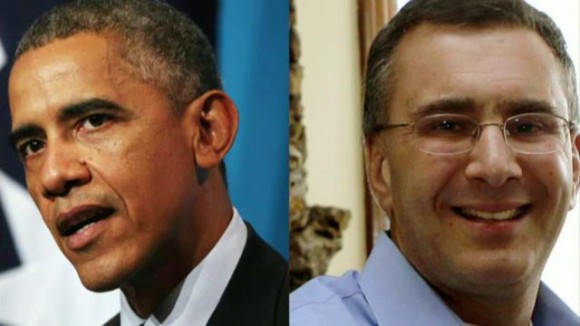 By: Roger Aronoff
Accuracy in Media

In recent days the Obama administration has attempted to separate itself from MIT Professor Jonathan Gruber’s comments regarding the torturous way that Obamacare was written, and the “stupidity of the American voter.” Not to let President Obama’s signature achievement be sullied by potential bad press, President Obama, Nancy Pelosi, and others have disavowed their connection to Gruber despite long, consistent government ties to the consultant.

The Daily Caller reports that “All told, Gruber has earned at least $5,893,100 for his work for federal and state governments,” with $4 million coming from the federal government since 2000. If Gruber’s a nobody, he’s a very well paid one. It’s a great example of how incredibly wasteful and careless government can be in respecting the hardworking taxpayer’s dollars.

“The fact that an adviser who was never on our staff expressed an opinion that I completely disagree with in terms of the voters is not a reflection on the actual process that was run,” contended President Obama during a press conference in Australia this past weekend. His administration is running scared about the optics that Gruber’s controversial comments have fostered just as the second enrollment period for the exchanges opens. He began his answer by saying, incredulously, “I just heard about this,” trying to pretend that this wasn’t a big deal among his staffers, though it had been in the news for nearly a week by that time.

Glenn Kessler of The Washington Post gave claims that Gruber earned nearly $400,000 from the Obama administration a “Geppetto Checkmark,” a rare certification of accuracy from the fact checker. “In any case, the passage of the Affordable Care Act in 2010 has been lucrative for Gruber and his microsimulation model,” writes Kessler. “All told, he has been hired by at least eight states to provide advice or assist in creating the health-insurance exchanges that are at the heart of the Affordable Care Act: Colorado, Connecticut, Maine, Michigan, Minnesota, Vermont, West Virginia and Wisconsin.”

His contract with the Obama administration’s Department of Health and Human Services (HHS) was a no-bid contract issued one month after Obama took office. It sure looks like they were ideological soul-mates. In an Obama-Biden campaign ad in 2012, Gruber was shown on camera saying that he helped President Obama develop his national version of that law.

CBS News, after mostly silence on this controversy, has published an article, titled “Why GOP Anger Over Jonathan Gruber’s Obamacare Comments is Justified.” It includes the following sentence: “In a video produced by the [2012] Obama campaign celebrating the anniversary of ‘Romneycare,’ Gruber says, ‘I helped Gov. Romney develop his health care reform, or Romneycare, before going down to Washington to help President Obama develop his national version of that law.’” Smoking gun, anyone?

As I outlined in a recent article on this continuing fiasco, Gruber has consistently peddled misinformation about Obamacare, including the idea that King v. Burwell—which undercuts federal Obamacare subsidies and is scheduled to go before the Supreme Court—is based upon a debate about a “typo.” I argued that it is about a lot more than that: “This is not just about whether this lawsuit ‘guts’ Obamacare, but whether the law will be interpreted based upon its plain language…”

It is also ridiculous for the President to dismiss Gruber as an “adviser who was never on our staff,” a blatant disavowal that ignores how key Democrats during the debate over the bill referred consistently to Gruber’s work as a justification for Obamacare, according to The Washington Free Beacon. And here is a YouTube video of Gruber admitting he was in the room with President Obama when the Cadillac tax was just an idea.

It seems that some in the media aren’t swallowing Obama’s disavowals. “Official logs show he [Gruber] visited the White House about a dozen times between 2009 and this year,” reports Politico. Other reports have that number as 19 or 20. “Despite Obama’s dismissive tone toward Gruber, the President has acknowledged that some of his own statements about the law were ill-advised, in particular his repeated promises that if Americans liked their health care plans they could keep them.” PolitiFact labeled the President’s claim that you could keep your health insurance if you liked it the “Lie of the Year” for 2013.

As for the Cadillac tax, Gruber has said,

“Then our Senator, John Kerry, had a very clever idea. He said, ‘Let’s call it instead a tax on insurance companies and not a tax on insurance plans.’ So we’ll have what we call a Cadillac tax, which is any insurance benefit that costs more than $23,000 a year will have a tax on it. Now, you and I know, economists know, that that will just get passed on in the price of insurance. So, really, what it’ll mean is basically above $23,000 we’re taking away your tax break.”

Gruber’s presentation of Senator Kerry’s “very clever idea” falls in line with his characterization of the stupidity of the American voter—that Americans won’t realize until its too late that the rising cost of insurance will be passed onto them.

But according to some in the media, Gruber was just conveying normal Congressional log-rolling, pulling and hauling, and the American people should not be surprised by it. “Mr. Gruber was exposing something sordid yet completely commonplace about how Congress makes policy of all types: Legislators frequently game policy to fit the sometimes arbitrary conventions by which the Congressional Budget Office evaluates laws and the public debates them,” writes Neil Irwin for The New York Times. “In the case of the Affordable Care Act, that meant structuring the law so that the money Americans must pay the Internal Revenue Service if they fail to obtain health insurance under the law’s mandate is a penalty, not a tax.”

Similarly, Steve Benen writes for MSNBC that “policymakers were constantly trying to accommodate perceptions when drafting the proposal, avoiding even hints of controversy because they were terrified of political blowback. Lawmakers in both parties do this all the time on key issues.” He calls the Gruber story a “shiny object for the political world to stare at for a while.”

Yes, Americans are getting a rare view into the politics of how Washington, D.C. works with Gruber’s insights—but this type of behavior manifested by one’s political leaders should not be a media cause célèbre nor dismissed as business as usual.

Gruber also made false promises. “This bill is largely public financing of private health insurance expansion,” he said in 2010. “Of the 30 million who gain health insurance coverage, about 18 to 20 million gain it through private health insurance coverage and about 10 to 12 million gain it through Medicaid.” In reality, 71% of the first year’s enrollments can be attributed to Obamacare expanding Medicaid to able-bodied working adults, according to the Heritage Foundation’s Daily Signal. How many more will enroll in Medicaid this year?

Yet Benen questons “…what deception? What exactly did we not know about the law before that we know now?”

The Gruber debacle is not a shiny object to distract the media and public from the successes of Obamacare, as Benen contends. Instead, it exposes the lies that were told about the law in order to sell it to the American people, the character and integrity of Barack Obama and the media that enable him, and the long-term consequences of Obamacare’s implementation.