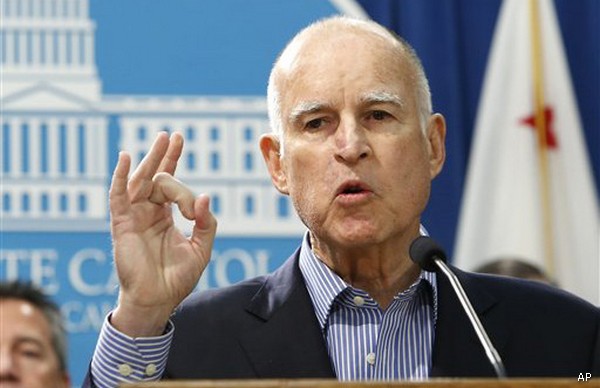 Please define what a person deemed a ‘threat‘ means…

Governor Brown just signed a gun confiscation bill that should send a chill down America’s spine. California leads the way, right off the Constitutional cliff, by becoming the first state that allows family members to ask a fascist judge to confiscate guns from a relative that they believe is a threat. That is so vague and arbitrary that anyone could be deemed a threat and it will be used as a political weapon to instill fear and exercise control, trust me. Several Marxist Democrats proposed this atrocity and they are using a murderous rampage in May near the University of California, Santa Barbara as a convenient excuse. Never, ever let an emergency go to waste. Ever.

Claiming that the parents of 22-year-old Elliot Rodger were thwarted in their attempts to seek help for their troubled son before said rampage, the Progressives gleefully lined up for select gun confiscation.

And they are not alone in the land of fruits and nuts. Law enforcement authorities in Connecticut, Indiana and Texas can now petition for a judge’s order that would allow them to seize guns from people they deem to be a danger. The new California law gives law enforcement the same option and extends it to family members. That’s right… While we weren’t paying attention and were off yelling ‘squirrel!’ at the latest outrage, these asshats were cherry picking legislation and judges to confiscate guns from those they deem ‘not worthy.’ I understand there are crazy people out there, but what happened to due process? What happened to your Second Amendment rights?

Pretty soon, anyone out there that does not agree with the government and the Marxist Progressives, will be deemed mentally unstable and their guns will be taken – door to door. It’s coming.

And dig this… Under the California bill, whoever seeks the restraining order would have to sign an affidavit under oath. If they lie, they could be charged with a misdemeanor. Boy – that’s taking them to the woodshed! A number of Republicans and Democrats voted against this measure, to no avail. And in a total justice vacuum, a court hearing would be held within 14 days after the restraining order is granted to give the gun owner a chance to argue there is no danger. Right… I’m sure all will be forgiven – not. You have to prove you are innocent after the fact — after you have been labeled as guilty of being a threat. So much for innocent until proven guilty. Up is down, black is white. Now that’s Orwellian.

Currently in California, authorities can seize legally purchased guns only from people convicted of a felony or a violent misdemeanor, people subject to a domestic violence restraining order or those who are determined to be mentally unstable.

The National Rifle Association and other gun-rights groups opposed the restraining order legislation.

“Our concern is not so much what they intended to do; our concern is with the method they put in place to address people with mental or emotional issues,” said Sam Paredes, executive director of Gun Owners of California. “We think this just misses the mark and may create a situation where law-abiding gun owners are put in jeopardy.”

Ya think?! This bill will allow confiscation against those that are at risk for violent behavior. The Democrats now seem to have their very own dictionary and are just making crap up to suit their evil agenda. Let’s see… The Leftists have already called all gun owners violent, along with Tea Party members, veterans and conservative Constitutionalists. Sounds like they are going to pull on their jackboots and come a knockin’ on a lot of our doors.

1 thought on “If You Are Deemed A Threat, They Are Coming For Your Guns – Now In A State Near You”