Hello and welcome to the Watcher’s Council’s new feature, ‘Weasel Of The Week’ , where we award the golden plastic Weasel to a public figure who particularly deserves to be publicly slimed and mocked for his or her dastardly deeds during the week. Every Tuesday morning, tune in for the Weasel of the Week nominations and check back Thursday to see which Weasel gets the votes and walks off with the statuette of shame!

Here are this weeks’ nominees:

As reported by CNS News, “At a ceremony Wednesday honoring Shaarik Zafar, who was just appointed to serve as the State Department’s Special Representative to Muslim Communities, Secretary of State John Kerry said “confronting climate change” is “a duty or responsibility laid down in scriptures.” “Confronting climate change is, in the long run, one of the greatest challenges that we face, and you can see this duty or responsibility laid down in scriptures, clearly, beginning in Genesis,” Kerry claimed.

Putting aside the obvious question of why the heck to do we need a Special Representative to Muslim Communities, I would like to know where the concern is for the genocide of Christians, the persecution of Jews and the general unraveling of the world on Obama’s watch. Kerry goes on to blather:

“Our fates are inextricably linked on any number of things that we must confront and deal with in policy concepts today. Our fates are inextricably linked on the environment. For many of us, respect for God’s creation also translates into a duty to protect and sustain His first creation: Earth, the planet. Before God created man, He created Heavens and Earth.”and… “Muslim-majority countries are among the most vulnerable” when it comes to the impact of climate change.

Weasel doesn’t quite cut it for a fascist agenda that evolves around wealth redistribution and the furtherance of Islam and the Caliphate. One wonders if Kerry has converted to the Religion of Pieces. Or if a new religion is being formed that combines climate change and Islam. Think about it and shudder. 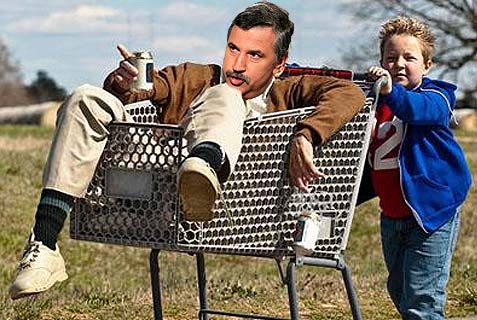 The Glittering Eye : for his most recent column in which he proposes a tax on gasoline as a means of making us more secure while ignoring something that might actually make us more secure: producing more oil and gas.

JoshuaPundit: For slander, bearing egregious false witness and a startling lack of compassion,

Senator Begich approved an attack ad on Republican senate candidate Dan Sullivan, claiming he had okayed a plea bargain as Alaska’s Attorney General of a light sentence for a particularly vicious rapist who went on to kill two seniors and rape their toddler granddaughter after he was freed.

EXCEPT – Sullivan was not then AG but was on active duty with the Marines when the original case was tried, and it was proven that the plea bargain itself only occurred because of a clerical error that likewise occurred before he took over. Sullivan responded with a hard hitting ad giving the facts, to the point where Begich’s ad was widely panned in Alaska’s press.

Even worse, when the family of the victim’s requested that both candidates take down their ads to stop them having to relive the tragedy and to avoid prejudicing the jury pool for the new trial, Sullivan immediately yanked his ad, but Begich actually kept his up until he received a cease and desist letter from the lawyer representing the victim’s family.

Begich has yet to apologize to Sullivan or to the victim’s family. He’s quite a piece of work.

Virginia Right!: For misrepresenting himself and stealing with both hands.

Many Conservatives rallied behind then Attorney General Bob McDonnell in 2009 as he ran for the governorship. McDonnell won election by a solid margin and his stance as a solid fiscal Conservative saw Republicans and TEA Party Conservatives unite in supporting him. But in the 4th and final year of his term, McDonnell became a tax and spend liberal, pushing the largest tax hike in Virginia history through the Republican controlled General Assembly. d.

And to make matters worse, it appears that as McDonnell left office that the expected surplus dollars were grossly overestimated and we had a big deficit to deal with.

Bob McDonnell and his wife Maureen were not the people we thought they were. And at the end of the trial, Bob was convicted of 9 counts and Maureen was convicted on 7 counts of corruption. Most in the know expect them both to see at least a decade behind bars. Of course they are planning an appeal.

In addition to jail time, Bob McDonnell signed into law a bill that strips Virginia elected officials of their pensions if they are convicted of corruption in office. And I assume his law license will also be revoked. So if he gets out of jail after a short time, he will be looking for work. I wonder if he supports $15 per hour for Fast Food workers now?

The Colossus of Rhodey: Ray Rice and the NFL Commissioner Roger Goodell; Rice, for being a complete a**hole for punching his fiancée unconscious, and Goodell for initially giving him a meager two-game suspension … and then using the recent video footage of Rice’s assault as a pretext to up the suspension to “indefinite.”

The Independent Sentinel: I have to give the Weasel of the Week nomination to President Obama for lying to his avid supporter Chuck Todd on national TV. Obama told interviewer Chuck Todd on Meet the Press that he didn’t delay his unlawful executive order to legalize millions of foreigners to save his Democratic senate. It wasn’t a political decision at all.

Obama said the decision to delay was made because he wanted to make sure the public and the congress understand why legalizing millions is the right thing. Politics didn’t enter it, said the most political president in our recent history.

The entire interview was filled with factual errors.

For example, Mr. Obama was asked by Todd about his comment calling ISIS a JV team. Mr. Obama said he didn’t call ISIS a JV team. The fact is that he made the JV comment in reference to the seizure of Fallujah by ISIS. The Washington Post gave Josh Earnest 4 Pinocchios for claiming Mr. Obama was not referring to ISIS. Then, incredibly, Mr. Obama doubled down and repeated the lie himself.

Nice Deb: I have to nominate Barack Obama for still being such a pathetic liar after all these years.

Everybody knows he was referring to ISIS (or ISIL as the Regime and virtually no one else calls them) when he called them “JV” back in January. The Washington Post Fact checker and even the hacks at Politifact have called him out on it.

Yet he and his poor spokesman Josh Earnest have doubled down on the ridonculous lie that he was referring to other terror groups – not ISIS.

He can’t just once in his life, admit that he got something wrong?

Did he really expect his lapdogs to swallow their pride and push his alternative BS?

It’s true, they’ll let the story drop out of the news cycle before they would if it were a Republican lying to the American people’s faces.

But they are at least making the weasel squirm a little in the the meantime, which is the least they can do.

It’s a weekly magazine of some of the best stuff written in the blogosphere and you won’t want to miss it... or any of the other fantabulous Watcher’s Council content.