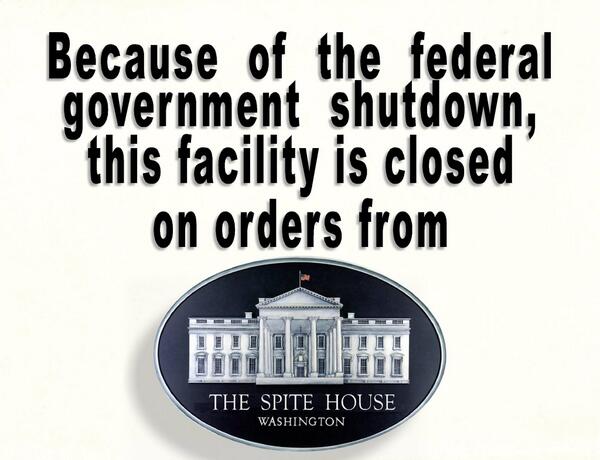 Because there’s just no better way to show who’s boss than scaring the living crap out of a bunch of elderly tourists from numerous countries. What a bunch of fascist asshats:

Vaillancourt was one of thousands of people who found themselves in a national park as the federal government shutdown went into effect on Oct. 1. For many hours her tour group, which included senior citizen visitors from Japan, Australia, Canada and the United States, were locked in a Yellowstone National Park hotel under armed guard.

The tourists were treated harshly by armed park employees, she said, so much so that some of the foreign tourists with limited English skills thought they were under arrest.

When finally allowed to leave, the bus was not allowed to halt at all along the 2.5-hour trip out of the park, not even to stop at private bathrooms that were open along the route.

“We’ve become a country of fear, guns and control,” said Vaillancourt, who grew up in Lawrence. “It was like they brought out the armed forces. Nobody was saying, ‘we’re sorry,’ it was all like — ” as she clenched her fist and banged it against her forearm.

Four dozen senior citizen tourists were on a 9 day tour (as opposed to a 3 hour tour for Gilligan’s Island, which would have been far preferable I imagine) of western parks and monuments. The fun ended suddenly when they arrived at Yellowstone Park and the Shutdown descended with Obama’s thuggish bureaucrats at the ready:

Rangers systematically sent visitors out of the park, though some groups that had hotel reservations — such as Vaillancourt’s — were allowed to stay for two days. Those two days started out on a sour note, she said.

The bus stopped along a road when a large herd of bison passed nearby, and seniors filed out to take photos. Almost immediately, an armed ranger came by and ordered them to get back in, saying they couldn’t “recreate.” The tour guide, who had paid a $300 fee the day before to bring the group into the park, argued that the seniors weren’t “recreating,” just taking photos.

“She responded and said, ‘Sir, you are recreating,’ and her tone became very aggressive,” Vaillancourt said.

The seniors quickly filed back onboard and the bus went to the Old Faithful Inn, the park’s premier lodge located adjacent to the park’s most famous site, Old Faithful geyser. That was as close as they could get to the famous site — barricades were erected around Old Faithful, and the seniors were locked inside the hotel, where armed rangers stayed at the door.

“They looked like Hulk Hogans, armed. They told us you can’t go outside,” she said. “Some of the Asians who were on the tour said, ‘Oh my God, are we under arrest?’ They felt like they were criminals.”

I’m sure to these good people visiting our country, they worried that a communist coup had ensued when they weren’t looking and that the State police were arresting them. Well, that’s pretty much what is going on. And for a country already in the grip of an Obama Depression, this will just hasten an already bankrupt country into the economic abyss. Cloward and Piven has arrived at Barack Obama’s usherance and with much gleeful anticipation on his Marxist part.

As the bus made its 2.5-hour journey out of Yellowstone, the tour guide made arrangements to stop at a full-service bathroom at an in-park dude ranch he had done business with in the past. Though the bus had its own small bathroom, Vaillancourt said seniors were looking for a more comfortable place to stop. But no stop was made — Vaillancourt said the dude ranch had been warned that its license to operate would be revoked if it allowed the bus to stop. So the bus continued on to Livingston, Mont., a gateway city to the park.

The bus trip made headlines in Livingston, where the local newspaper Livingston Enterprise interviewed the tour guide, Gordon Hodgson, who accused the park service of “Gestapo tactics.”

“The national parks belong to the people,” he told the Enterprise. “This isn’t right.”

Calls to Yellowstone’s communications office were not returned, as most of the personnel have been furloughed.

Many of the foreign visitors were shocked and dismayed by what had happened and how they were treated, Vaillancourt said.

“A lot of people who were foreign said they wouldn’t come back (to America),” she said.

The National Parks’ aggressive actions have spawned significant criticism in western states. Governors in park-rich states such as Arizona have been thwarted in their efforts to fund partial reopenings of parks. The Washington Times quoted an unnamed Park Service official who said park law enforcement personnel were instructed to “make life as difficult for people as we can. It’s disgusting.”

And so it goes from nudge, to shove and very soon, to shoot. Surely Americans now see they are living under the iron fist of a dictator. They are using lands and monuments that belong to America against us – held hostage as wards of the State, not property of the free. What makes Americans think that with the government in control of healthcare that they won’t use the same tactics? Comply or no antibiotics for you… submit or no chemotherapy… kneel or no transplant. And even then, only those who we deem young enough, correct enough or wealthy and powerful enough will receive the benefits of the all-controlling Marxist State. America has become Russia’s protege thanks to the enemies within.