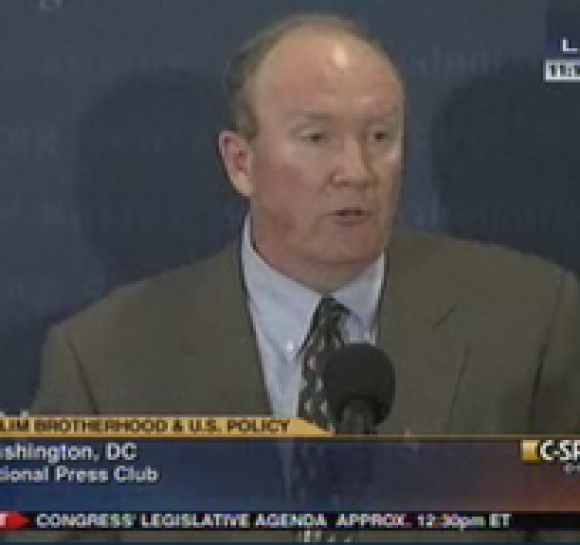 It is a subject that Mitt Romney and Barack Obama don’t want to talk about. But former federal prosecutor Andrew McCarthy on Wednesday offered a virtual indictment of top State Department official Huma Abedin as a security risk and said that Obama’s embrace of the anti-American Muslim Brotherhood constitutes a national security crisis and should be a major campaign issue.

McCarthy, who prosecuted the perpetrators of the 1993 World Trade Center bombing, said it’s “vitally important” that Romney speak out publicly in support of the five members of Congress asking questions about Muslim Brotherhood influence over U.S. policy. He said Romney should “stand up and be counted.”

Romney recently said that questions about Abedin, deputy chief of staff to Secretary of State Hillary Clinton, and the Muslim Brotherhood, were not part of his campaign.

In addition to prosecuting terrorists, McCarthy wrote a book, The Grand Jihad, the title of which is taken from a Muslim Brotherhood document obtained by the FBI and which identifies front groups and collaborators in the U.S.

At a packed news conference with six television cameras and journalists overflowing into the hallway, Center for Security Policy president Frank Gaffney introduced McCarthy and released a ream of documents on Muslim Brotherhood infiltration of the U.S. Government.

The conference was carried by the C-SPAN television network and is available for viewing.

McCarthy said he was “baffled” by how Abedin ever got into her position, noting that, if she had truthfully filled out Standard Form 86 for federal employment and a national security clearance, this would have disclosed that she (1) worked at an institute founded by a wealthy influential Saudi “intimately involved in the financing of terrorism” and (2) the Saudi started a “charity” which has been designated as a terrorist organization that financed al-Qaeda.

McCarthy’s presentation was a lengthy examination of Abedin’s involvement with and family ties to the Muslim Brotherhood.

AIM has raised some of the same concerns, noting that, if the media were truly interested in getting to the bottom of the controversy over Abedin, they could demand access to Abedin’s Standard Form 86, “which she was supposed to fill out before getting her State Department job.”

But it’s not clear that she did fill out that form, which is 127 pages in length and should have disclosed her Muslim Brotherhood connections.

McCarthy said he was alarmed that only five members of the House—Reps. Michele Bachmann (R-Minn.), Trent Franks (R-Ariz.), Tom Rooney (R-Fla.), Lynn Westmoreland (R-Ga.) and Louie Gohmert (R-Texas)—have asked for inquiries into how Abedin and others got their security clearances at a time when U.S. foreign policy under Obama has shifted radically in favor of “avowed enemies of the United States.”

Material released by Gaffney’s organization included a letter signed by conservative leaders to Republican House Speaker John Boehner asking him to stand by Rep. Bachmann and the others, rather than criticizing them. Boehner has said that Bachmann’s “accusations” were “dangerous.”

The conservatives asked if the State Department “followed its own security clearance standards regarding Ms. Abedin, given her familial relations with people in the Muslim Brotherhood.”

Another handout listed the following examples of the Obama Administration aligning itself with the Muslim Brotherhood:

At the time that the rule of U.S. ally Hosni Mubarak was under assault from street protests led by the Muslim Brotherhood, Kagan wrote a column for The Washington Post threatening the Egyptian government if it successfully repressed the revolutionary turmoil.

During an appearance on CNN, Kagan attacked Glenn Beck, then with Fox News, for predicting that a Muslim takeover of Egypt could lead to an expansion of Islamist power in the Middle East and elsewhere. Kagan called it “panic-mongering of the worst kind,” adding, “It’s not the first time in American history that kind of panic mongering has played well on TV or in the press…I think we need to be intelligent about how we move forward. Not be guided by panic about some global Islamic takeover. And, in fact, that kind of panic leads to the worst kind of policies.”