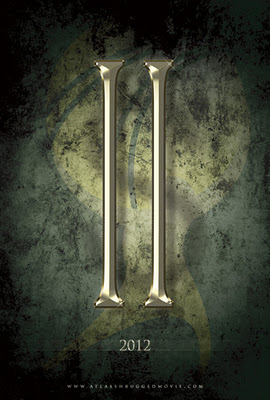 Atlas Shrugged Part 2 to be in theaters October 2012

Based on Ayn Rand’s (Feb. 2 1905 – Mar. 6 1982) 1957 novel, ATLAS SHRUGGED is set in the near future when a dystopian United States finds its leading innovators, from industrialists to artists, mysteriously disappearing at an alarming rate resulting in the “stopping the motor of the world.”

Joining the production is Duncan Scott, a four time Emmy® award-winner, who worked extensively with Rand on the restoration of her film classic “We the Living.”

“Rand has long been the focus of Duncan’s work. He brings invaluable experience to the table as well as an incredible depth of knowledge regarding Atlas. We’re thrilled to have him on the team.” stated Producer John Aglialoro. Rand’s 1,100 page novel is being produced by Atlas Productions as a trilogy which follows the three part structure of the bestselling book. Part 1 was released theatrically on April 15, 2011. Part 2 is set to be in theaters October 2012 amidst what is sure to be a fever pitched presidential election season.

“It’s no coincidence that we chose Ayn Rand’s Birthday as the occasion to make this announcement. We have high aspirations for Part 2. We’ve looked carefully at Part 1 and taken time to analyze and reexamine everything from the script to the casting. John and I are committed to making a great Part 2 and excited about what lies ahead,” according to Producer Harmon Kaslow.

A new teaser trailer is now available on YouTube with an official teaser poster adorning the trilogy’s official website.