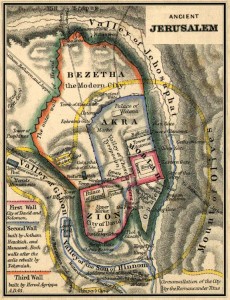 Found at Now The End Begins: Obama Signs Document That Tells Israel Jerusalem Is Not Your Capital

MEMORANDUM FOR THE SECRETARY OF STATE

SUBJECT: Suspension of Limitations Under the Jerusalem Embassy Act

Obama signed this on June 3, 2011 – Pursuant to the authority vested in me as President by the Constitution and the laws of the United States, including section 7(a) of the Jerusalem Embassy Act of 1995 (Public Law 104-45) (the “Act”), I hereby determine that it is necessary, in order to protect the national security interests of the United States, to suspend for a period of 6 months the limitations set forth in sections 3(b) and 7(b) of the Act. 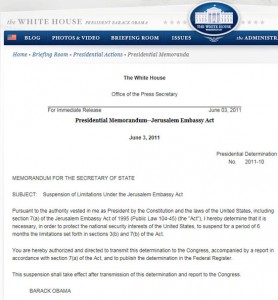 You are hereby authorized and directed to transmit this determination to the Congress, accompanied by a report in accordance with section 7(a) of the Act, and to publish the determination in the Federal Register.

This suspension shall take effect after transmission of this determination and report to the Congress.

May I ask by what authority the acting president of America deems it his place to tell another sovereign nation where it’s capital may be located?

23 thoughts on “Obama Dictates to Israel: Jerusalem is Not Your Capital”

Leave a Reply to The Third Archon Cancel reply