Cuban literacy programs are used throughout the third world and even in New Zealand and the US.

They are more than “literacy” programs-they are in reality socialist indoctrination schemes.

Now they are being used to to return East Timor to what it was pre 1975-a socialist mini Cuba on our back doorstep. 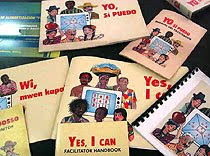 From the Australian Marxist-Leninist journal LINKS.

In Timor Leste [East Timor], which is one of the world’s newest countries and Australia’s poorest Asia-Pacific neighbour, Cuba is delivering an educational aid program which aims to eradicate illiteracy, currently affecting nearly 50% of the adult population, within a period of less than 10 years. The Timor Leste national literacy campaign, utilising the Cuban-developed Yo! Si Puedo (Yes! I can) audiovisual teaching method, opened its first classes in the capital Dili in June 2007.

Eighteen months later, by December 2008, nearly 18,000 adults had completed a course of 65 lessons, led by local village monitors who work under the close supervision of 36 Cuban education advisers deployed throughout the country. If it continues at this rate, the literacy campaign can be expected to have a major impact on the stabilisation and development of Timor Leste, providing a model for other Pacific countries struggling to overcome their educational disadvantage.

Why are the Australian and New Zealand taxpayers supporting a country that allows this program to continue?