The Auckland far left was on the streets yesterday protesting against Israel’s partial blockade of the Gaza strip. 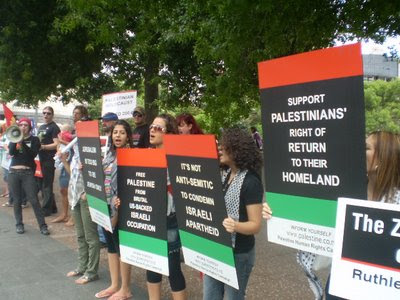 There were no calls to end rocket attacks on Israel from Gaza-the reason for the blockade.

“Gaza needs food not bombs!” echoed through the streets of Auckland as 30 people joined a lively picket in solidarity with the people of Gaza today in the city centre. Organised by Students for Justice in Palestine, GPJA and Socialist Worker, it attracted huge support from passers by.

John Minto from GPJA condemned the collective punishment policy that the Israeli government was inflicting on the people of Gaza comparing it with the Bantustans of Apartheid South Africa. 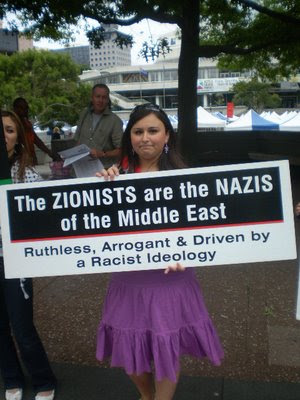 Joe Carolan from SW celebrated the people power revolt that ripped down the Apartheid Wall, comparing it to the revolt in Berlin in 1989, and warned that if Egypt’s dictator Mubarrak used troops and riot cops to reseal Gaza’s border, the revolt would spread into Egypt. Egypt is the second highest recipient of US military aid after Israel. 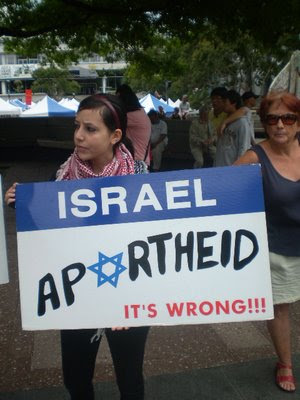 Sahar Ghulkor from SJP thanked people for demonstrating their solidarity with Gaza with very little notice, and extolled us to build for two forthcoming days of action on march 1st and march 15th.

March 1st will see a radical theatre group build an Apartheid wall and Israeli military checkpoint outside of Auckland’s US consulate, and March 15th promises to be one of the largest anti war mobilisations in the city in years, building support for (a) an end to the occupation of Iraq, (b) solidarity with the people of Gaza and Palestine and (c) the withdrawal of all NZ troops from Afghanistan.