Green Party MP Nandor Tanczos was an anarchist well into the the late 1990s and probably still is.

Certainly he is still militantly anti-capitalist.

Nandor Tanczos is a long time friend and associate of Derek Wall, principal Male Speaker of the Green Party of England and Wales. 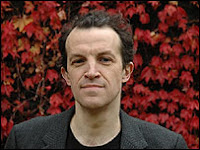 Wall is a militant anti-capitalist and eco-socialist and a leading Venezuela Solidarity activist,

Wall lists his interests as;

Wall is very supportive of the green anarchist movement and Peoples Blobal Action, the brainchild of the Mexican Zapatistas, which has inspired several NZ groups, including members of the “Urewera 17“.

An anti-capitalist placard from Seattle showed a dophin with the slogan, ‘I am not a trade barrier’. The WTO has forced countries to accept environmentally damaging products including tuna caught with nets that kill dolphins. Green pressure groups like Greenpeace, green direct action networks and green anarchists oppose unlimited free trade. Green Parties have been very active in opposing gm crops and the worst excesses of the corporations. The British direct action green network Reclaim the Streets helped found Peoples Global Action with the Mexican Zapitastas.

In 2006, Derek Wall published “Babylon and Beyond: The Economics of Anti-Capitalist, Anti-Globalist and Radical Green Movements”

According to one reviewer, the book is;

An outline of different forms of anti-capitalist economics. Moving from the ideas of capitalist anti-capitalist like George Soros and Joseph Stiglitz, Korten and Klein, to green localists like Caroline Lucas and Vandana Shiva, Marxism from Marx to Castro, Anarchists and autonomists like Hardt and Negri, monetary reformers like Major Douglas or Tobin, ecosocialist like Joel Kovel

Nandor Tanczos wrote the foreword to Babylon and Beyond.

Authoritative voices are warning us that we are very close to the point where world demand for oil will outstrip the capacity of the oilfields to supply. Our total dependence on fossil fuels, the use of which has provided the energy for an enormous expansion of human activity and population, is like a chemical addiction. And as the USA has recently confirmed in Iraq, strip a junkie of their supply and the temptation to turn to crime can be irresistable.

We cannot grow forever on a finite planet. If we continue to assume that endless growth and consumption is possible, and disregard the biosphere’s capacity to meet our greed, and if we continue to neglect social justice and fair and sustainable wealth distribution, we will reap a bitter harvest…

We humans think that we can own the planet, as if fleas could own a dog…

The ability to ‘own’ property is fundamental to capitalism. Since the first limited liability companies – the Dutch and British East India Companies – were formed, we have seen the kidnapping and enslavement of 20 – 60 million African people and the rape, murder and exploitation of indigenous people around the world. Colonisation was primarily about mercantile empires, not political ones. It was all about forcing indigenous, communitarian people to accept private individual ownership of resources, which could then be alienated, either by being bought or stolen. The subsequent political colonisation was just about how to enforce that ownership.

Clearly, Nandor Tanczos has not moved much beyond his anarchist/anti-capitalist days.