Check out the Bebo page of Potangotango-Karena 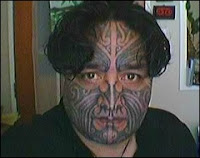 This guy has some interesting views;

message to black power and the mongrel mob go hard bro’s we have to have the best of the best if you war against each other the purpose is of course obvious, it is to sort out who of the two groups will be able to go up against the crazy marauding invading pakeha.

if there are deaths and murders these are called collateral damage. so I say to the iwi, hapu and whanau if you need shop buy off the two groups they need our support as black power and mongrel mob are the only ones who will take on the pakeha. no reira koutou kia kaha i ou mahi hirahira

Note also that he lists as friends both Teanau Tuiono and “Uruwera 17” arrestee .