The radical left wants to ruin any hope of NZ securing a free trade deal with the US. 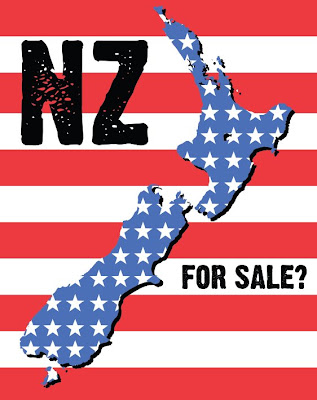 Between the 9th and the 11th of September, the Auckland War Memorial Museum will host the “United States New Zealand Partnership Forum“. The forum brings together representatives of the two countries as well as the people from various powerful US and NZ corporations. The aim of this forum is to tighten the links between the two nations; specifically by pushing for the signing of a neo-liberal free trade agreement. A coalition of groups is mobilising to disrupt the forum and let the planet know that OUR WORLD IS NOT FOR SALE.*

We are everywhere, the resistance to the USNZ Partnership Forum is just another battle in the fight for global justice that rages from Palestine to Tonga, and from the Phillipines to Mexico. Last year activists swamped Te Papa in Wellington and turned the annual weapons industry conference into a battlefield between protestors and police. We won that battle and never again will the weapons industry return to Te Papa. The industry now conducts its annual forum with the utmost secrecy lest they be hunted down by the multitude of peacemongers.

The weekend before the Partnership Forum, thousands of Australians will converge in Sydney to resist the Asia-Pacific Economic Cooperation (APEC) conference. Workers in Aotearoa are winning industrial victories through militant picket line action and grassroots solidarity. During the hospital workers lockout just passed I helped turn away scabs outside Waitakere Hospital with locked out cleaners. At 5am in the dark and the rain we showed corporate power that when people are actively resisting in the streets, organising together and building solidarity between ourselves, we are unstoppable.

That’s why we need you to come to Auckland in September between the 9th and the 11th. The left in Aotearoa has a well established tradition of anti-imperialist and anti-capitalist direct action resistance. We want to continue this tradtions and build on it. Our ability to disrupt this Partnership Forum and show the government, each other and the world what we are capable of doing, depends on us being irrepressibly large, militant and woven tightly together with solidarity and hope, during the march on Monday September 10 at 12noon from Aotea Square to the Museum.