The West sees China as an emerging capitalist nation.

China sees itself as committed to Marxism-Leninism and on the the way to “Socialism with Chinese Characteristics”.

If the West is wrong about China, we’re all in deep trouble.

Me, I’m a simple man. I believe what the Chinese tell me. 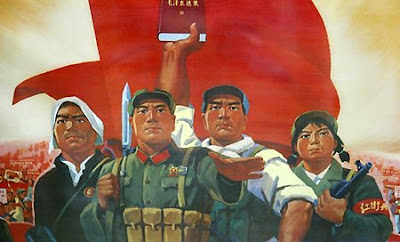 Enhancing the construction of the Party is the key to creating a new situation in building socialism with Chinese characteristics.

President Hu Jintao stressed this important thought in his speech at the Party School on June 25. He gave a profound exposition on the importance of the Party’s self-perfection and further charted the direction of the Party’s construction.

What kind of Party should we construct and how are major questions concerning the fate of the CPC and the country. To adhere to the principle that the Party exercises self-discipline and is strict with its members in advancing the great cause of Party construction is the clear answer to this question.

In the process of promoting socialist modernization, China faces a complicated environment and strenuous tasks as well as unprecedented opportunities and challenges. We should scientifically judge the situation and master the historical missions, enhance the Party’s skill of leadership and raise the Party’s capacity to resist corruption, prevent degeneration and withstand risks.

We should continuously enhance the creativity, rallying power and combat capability of the Party, strengthening its leadership in guiding the people to build socialism with Chinese characteristics.

All members of the Party should study and implement Marxism-Leninism, Mao Zedong Thought and Deng Xiaoping Theory, the important thought of Three Representatives and the scientific concept of development. The organization construction of the Party should be enhanced to build a great team.

All Party members should have a clear understanding on the issue of Party construction and raise consciousness in its implementation. That is the way to guarantee the vigor and vitality of the Party.