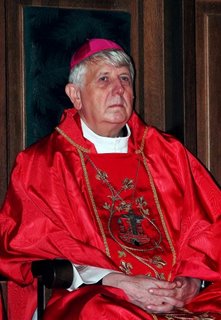 From the New York Times

WARSAW, Jan. 7 — The newly appointed archbishop of Warsaw, Stanislaw Wielgus, abruptly resigned on Sunday at a Mass meant to celebrate his new position after having admitted two days earlier that he had worked with the Polish Communist-era secret police.

Moments before he was to symbolically ascend to his new place in the church hierarchy by taking his seat on the archbishop’s throne at St. John’s Cathedral in Warsaw, Bishop Wielgus read from a letter he had sent Pope Benedict XVI earlier in the day offering his resignation “after reflecting deeply and assessing my personal situation.”

A roar of shock arose from the crowd inside the cathedral and stunned many people watching the proceedings live on television. The Vatican had announced the resignation a half hour earlier, though few had heard the news.

Bishop Wielgus, 67, had tried to minimize reports of his collaboration, which surfaced two weeks after the pope appointed him to the post on Dec. 6. He insisted that his contacts with the country’s feared Sluzba Bezpieczenstwa, or Security Service, were benign and routine.

Bishop Wielgus may have believed that there were no longer documents linking him to the secret police. Gen. Czeslaw Kiszczak, who served as chief of secret services and minister of internal affairs during the Communist years, told the Polish clergy in the early 1990s that all files related to them had been destroyed, according to Adrzej Jonas, editor of the Warsaw Voice, a weekly newsmagazine.

But microfilm of some of the documents on Bishop Wielgus survived. They do not include any reports written by the bishop, though in one document a secret police agent praised him for providing information on fellow priests while teaching at the Catholic University of Lublin.

He admitted deeper involvement Friday after the Polish news media published the documents, though he maintained that he did not spy on anyone or hurt anyone. Two groups of experts, one from the church, said the documents proved his willingness to work for the secret police even though they did not prove what he did.

Allegations that the secret service archives contained incriminating documents concerning Bishop Wielgus first appeared in the Polish media in the middle of 2006, shortly after he was mentioned as a potential successor to Cardinal Glemp. The documents that led to his resignation had been located by Dec. 20, when the Polish news media began reporting their contents.