For many years US policy on Cuba seems to have been to wait for Fidel Castro to die, then push for democratic changes. Unfortunately, Venezuela’s Marxist President, Hugo Chavez may be set to wreck that strategy. 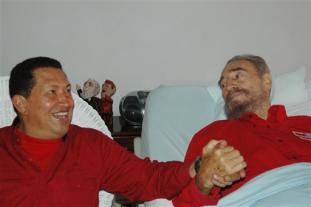 CARACAS, Venezuela — One is a Cold War icon who has defied the United States for nearly a half-century. The other is a charismatic ex-military man who could be Washington’s biggest Latin American nemesis for years to come.

Fidel Castro and Hugo Chavez have put their close relationship on display with frequent visits by the Venezuelan president as the 80-year-old Cuban leader recovers from recent intestinal surgery. The two are expected to take the spotlight again this week as Havana hosts dozens of leaders at a summit of the Nonaligned Movement.

Chavez and his mentor Castro have markedly different styles, but their friendship ensures Cuba critical economic support with a bonanza of Venezuelan oil and credit.

Some who know the 52-year-old Venezuelan predict he will continue to promote Castro’s beliefs, challenging U.S. hopes that the Cuban leader’s illness will spur democratic change in the communist country.

Chavez “would be willing to provide all the economic support that’s necessary to avoid an opening in Cuba, to avoid the U.S. having an influence in Cuba,” said Cristina Marcano, co-author of a critical biography of the Venezuelan.

Castro and Chavez are united by what they call a crusade against U.S. dominance of Latin America and unbridled capitalism that is driving the world to ruin. A personal connection feeds their ideological closeness.

At Castro’s bedside in Cuba recently, Chavez lovingly grasped the hand of the man he says he sees as a father.

“He’s like the father of all the revolutionaries of our America. He’s the lighthouse that lights the paths,” Chavez said in one of his marathon speeches that, like Castro’s, often run for hours.

Castro has designated his younger brother Raul as his eventual successor, but in many ways Chavez has already assumed Castro’s role as Latin America’s biggest challenge to the U.S. government.

On the economic front, Cuba’s trade with Venezuela is booming. Venezuela has helped Cuba defy a U.S. trade embargo, partly supplanting Soviet subsidies that dried up in the early 1990s.

“Chavez is a major factor in what’s going to happen in Cuba from now on,” said Larry Birns, of the Washington-based Council on Hemispheric Affairs. “He essentially has rendered Castro and Castroism immune to any kind of U.S. action unless the U.S. is prepared to threaten its oil supply and begin a diplomatic conflagration in the Caribbean.”

1 thought on “Chavez to Save Cuban Socialism?”