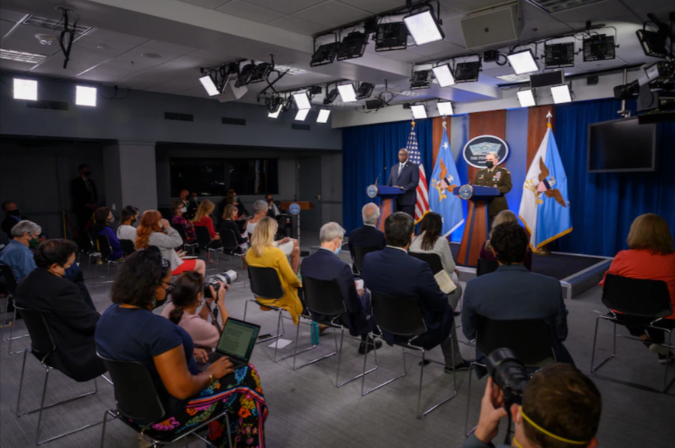 A relatively small but experienced organization has written an open letter with mounting signatures calling for the resignation of both Lloyd Austin, Secretary of Defense, and Chairman of the Joint Chiefs of Staff, General Mark Milley. The organization is Flag Officers for America and the letter is found on this site.

Meanwhile, the Secretary of Defense has been busy in the last few days fielding phone calls with international leaders demanding some attention and answers.

All in the same day, those calls included:

Then there is another mounting crisis as noted below that both men attempted to address.

In a press conference on September 1, 2021… here is what was addressed in part:

Leaders of the Defense Department shared their thoughts and feelings regarding America’s longest war, which ended yesterday with the last military aircraft evacuation flying out of Kabul, Afghanistan.

Austin said his heart is with the families and loved ones killed in the Aug. 26 suicide attack at the Hamid Karzai International Airport. Thirteen U.S. service members were killed, 22 wounded and over 100 Afghan evacuees were killed or wounded.

The secretary also said he remembers the 2,461 service members who were killed and the more than 20,000 wounded since the U.S. entered Afghanistan in October 2001, days after the 9/11 attacks.

Now the war is over and we’re entering a new chapter, one in where our diplomats and our interagency partners take the lead. We’re part of an urgent team effort to move Afghan evacuees out of temporary housing in intermediate staging bases in the Gulf and in Europe and on to begin new lives. And I’ll be traveling to the Gulf next week to thank our partners there who have done so much to help save and shelter Afghan civilians.

Now, some of those brave Afghans will be coming to make new lives with their families in America, after careful screening and security vetting run by our interagency partners. We’re temporarily sheltering some of these evacuees at military facilities here at home and I’m proud of the way that our military communities have welcomed them.

Some of these courageous Afghans fought alongside us, and they and their families have more than earned their places in the land of the free and the home of the brave. And welcoming these Afghans isn’t just about what they’ve done, it’s about who we are.

Now, as one mission ends, others must go on. And even during our Afghan retrograde, this — this department was racing to help victims of natural disasters at home and abroad, and we still are. We’ve been driving to — to end the pandemic and we’ve continued to tackle security challenges from China and Russia, Iran, and North Korea.

It’s our duty to defend this nation and we’re not going to take our eye off the ball. And that means relentless counter-terrorism efforts against any threat to the American people from any place, it means working with our partners to shore up stability in the region around Afghanistan, and it means a new focus to our leadership in this young century, to meet the security challenges from China, to seize new opportunities in the Indo-Pacific and elsewhere, and to deepen our ties with old allies and new partners, and to defend our democracy against all enemies.

But for today, I want to end with the word to the force and their families. I know that these have been difficult days for many of us, and as we look back as a nation on the War in Afghanistan, I hope that we will all do so with thoughtfulness and respect. I will always be proud of the part that we played in this war.

But we shouldn’t expect Afghan war veterans to agree any more than any other group of Americans. I’ve heard strong views from many sides in recent days, and that’s vital, that’s democracy, that’s America. As we always do, this department will look back clearly and professionally and learn every lesson that we can. That’s our way.

But most shocking was General Milley’s response to a question regarding collaborating with the Taliban.

The chairman of the joint chiefs of staff on Wednesday said it was ‘possible’ that the Pentagon would work with the Taliban to hunt down and destroy the ISIS-K terrorist group.

During a Department of Defense briefing, Gen. Mark Milley, chairman of the joint chiefs of staff, was asked whether that meant officials would coordinate with their mutual enemy, the Taliban.

‘It’s possible,’ he said, explaining that in war you ‘do what is necessary.’

Secretary of Defence Lloyd Austin jumped in quickly to add: ‘I would not want to make any predictions.

‘I would tell you that we’re gonna do everything that we can to make sure we remain focused on ISIS-K, understand that network, and, at the time of our choosing in the future, hold them accountable for what they’ve done.’ More here.

How did we get here? A full surrender of America to the Taliban on the soon-to-be eve of the 20-year anniversary of 9/11.

Those Flag Officers and their letter are right… Austin needs to go. Milley should go and take General McKenzie with him. Make sure that Biden, Harris, Pelosi and so many others go with them. The world needs protection and these people can’t and won’t provide it.

Oh yeah… there is Russia, North Korea, China, and Iran to fret about too.

2 thoughts on “SecDef Austin And Gen. Milley Know They Are In Big Trouble”