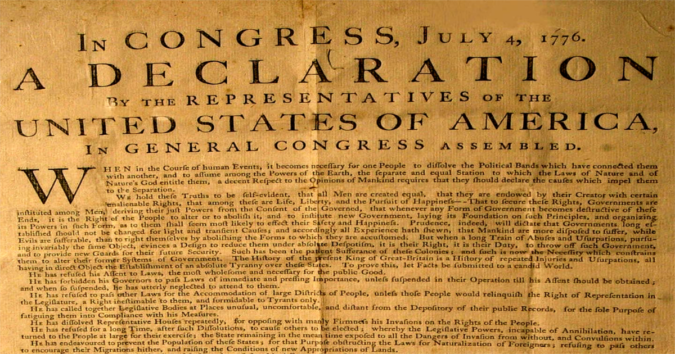 It is for us the living, rather, to be dedicated here to the unfinished work which they who fought here have thus far so nobly advanced. It is rather for us to be here dedicated to the great task remaining before us—that from these honored dead we take increased devotion to that cause for which they gave the last full measure of devotion—that we here highly resolve that these dead shall not have died in vain—that this nation, under God, shall have a new birth of freedom—and that government of the people, by the people, for the people, shall not perish from the earth.

President Lincoln led this country through a hot civil war, one raging over whether our country would cement the ideals expressed in our Declaration of Independence – the outcome of which would determine whether our Republic would survive or “perish from the earth.”

Today we are in a cold civil war; and our Constitutional Republic is in even a more perilous position than it was during “the” Civil War.

The election of November 3, 2020 was not merely a “stolen election” by one political party scheming for political advantage. No, it was the consummation of decades-long plotting and scheming by enemies foreign and domestic. Whether one wishes to refer to it as a coup or a revolution matters little – what matters now is whether or not we will save our Constitutional Republic.

Our federal government and all its powers are currently controlled by an un-elected regime, the Biden-Harris Junta. It is a puppet of the CCP – which also means that by extension the CCP has influence upon our military chain-of-command, if not control of it.

To help cover their schemes, the enemies domestic slander patriots as “White Supremacists” (a severe escalation from “Deplorables”). No, we – whether of White, Black, Brown or Asian appearance (as there is but one human race), all children of God and blessed to be American citizens – are the “white hats” in this struggle to recover our Divinely-inspired nation.

Perhaps fearing that this cold civil war will go hot, the enemies domestic also preemptively slander peaceful patriots as “domestic terrorists” to intimidate and suppress us – even as their “bottom-up” Marxist revolutionary cadres in Antifa and BLM burn and loot and domestically terrorize across our land. No, we are not “domestic terrorists” – we are counter-revolutionaries, patriotically seeking to Save America.

On this July 4, 2021 we still have the means to both peacefully (re)proclaim our Independence Day and restore our Constitutional Republic: by exposing the means by which the election was stolen and the “color revolution” planned and executed; by identifying the enemies foreign and domestic that were behind it all (including those who collaborated, or were mere accessories to the treason).

If we do that, the public pressure will be enormous – including from tens of millions of our fellow citizens (new “white hats”) who will have the scales fall from their eyes, finally realizing that the media has been lying to them, and manipulating them.

With such public awakening, the pressure for justice and for reinstating our duly-elected President will be hard, if not impossible, for the revolutionaries to stop. Indeed, many in the military and justice arms of the federal government may well see the errors of their ways, repent, and help expose the evil forces that have seized control of our nation.

On this July 4th, contemplate these lyrics from Lee Greenwood’s now-immortal God Bless the USA, and click on them to see a beautiful rendition of it that appeared one year ago. As you listen, reflect upon all that has occurred between then and now – and steel your resolve to be a “white hat” heeding the call “for times such as these”:

And I’m proud to be an American
Where at least I know I’m free
And I won’t forget the ones who died who gave that right to me
And I’ll gladly stand up next to you and defend her still today
Cause there ain’t no doubt I love this land, God Bless the USA

I am the author of the book Communiqués From the Vast Right-Wing Conspiracy – available on Kindle (only $2.99) and in paperback (only $12.99). Please consider enjoying my work by purchasing and reading. Thank you.

Thomas C. Wigand is a citizen patriot – trained as an attorney and hailing from Florida – who in in his own small way is fighting alongside stalwarts such as Trevor Loudon, Cliff Kincaid and David Horowitz. Fighting alongside they and all other patriots that recognize the existential threat posed by the Four Horsemen of the Apocalypse Collectivism: Progressivism; Socialism; Fascism and Communism. Mr. Wigand is the author of the book "Communiqués From The Vast Right-Wing Conspiracy” available on Amazon in print and Kindle versions.