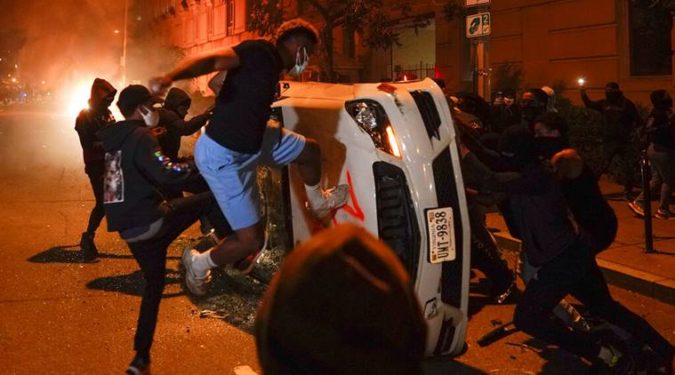 Such notables as Drew Brees and General Mad Dog Mattis sold out to the mob this week. Meanwhile, a 16-year-old girl, Ala’junaye Davis, was killed in Baltimore, shot in the throat in a Democrat-run city whose previous mayor pleaded guilty to federal conspiracy and tax evasion charges in the “Healthy Holly” book fraud scandal. The local paper reports that Baltimore homicides total 135 so far this year, outpacing the 128 recorded at this time last year.

The mob, however, is concerned about the death of George Floyd, a criminal whose carefully hidden autopsy showed traces of meth, fentanyl, marijuana, and heroin. It is not clear what role these drugs played in his death.

With the economy back on track, after re-opening many states, it’s the communist rabble on the streets that poses the most direct threat to the safety and security of the American people. So far, President Trump has depended on the governors to deploy the National Guard.

Tucker Carlson observed on Thursday night that the riots are all about getting rid of Trump. He means that the Democrats running the major cities are allowing the violence to spread so that they can create more chaos that they can blame on Trump.

This strategy helps explain why the dozens of black deaths taking place in our major cities, as a result of black-on-black violence, are of no interest to those who back or excuse the riots and looters.

Crime victim advocate Tina Trent comments, in a blog post about Atlanta, another Democrat-run city, that black-on-black violence accounts for nearly all killings of black youth

Ignoring the realities of life in the big cities, Drew Brees apologized to the mob for a comment defending the American flag, demonstrating that he is a rich football player with no moral backbone. His opinion, one way or another, is of no lasting consequence. But Mad Dog Mattis is a retired general who is clearly angry over getting fired by Trump. He favored using troops in foreign wars to die on behalf of Muslims, but he doesn’t want American troops deployed to put down a communist insurrection inside the United States.

Mark Esper is the current Defense Secretary and has undermined President Trump by declaring his opposition to using the Insurrection Act to suppress mob violence. Esper’s subversion of the concept of civilian authority over the military is a very serious matter. It is reminiscent of the old movie, “Seven Days in May,” when Burt Lancaster plays a rogue general leading a coup against the president. In the film, the president learns of the plot and defeats it.

In real life, Trump defeated a coup led by Barack Hussein Obama’s CIA and is now facing a revolt from Esper over what may be required to clean up the streets.

Another failing in our society is the inability of some major anti-drug groups to take a stand against the riots in society. I am on a list of email exchanges about America’s growing drug problem and some of the organizations have decided to take a stand against the police but not the drugs that drove George Floyd into yet another confrontation with the law. Pictures of some of the “demonstrations” show rioters passing marijuana joints to get high as they get hyped up for another assault on the police.

Attorney David Evans, Senior Counsel to Cannabis Industry Victims Educating Litigators (CIVEL), notes that scientific studies demonstrate a relationship between marijuana and violence. The Weather Underground communist terrorist Bernardine Dohrn once said, “guns and grass are united in the youth underground.” These were the weapons of revolution back then and are still major factors. One has to be blind not to see it.

The use of drugs certainly helps explain the calls to “defund the police” in some cities where liberal governors kept the pot shops open during the lockdown of law-abiding citizens.

But judging by the Department of Justice press conference on Thursday, featuring Attorney General Bill Barr and FBI director Christopher Wray, Trump’s top people seem to have no real understanding of what they are up against. They never once mentioned the word “communist” and did not display any knowledge of the drug use that characterizes some of the protests – and the death of George Floyd himself.

The police in Minneapolis are faced with the drug crisis every day, but the evidence of drugs in George Floyd’s system is denounced as a “red herring” by the lawyers for the family who want to shake down the city for big bucks in their police lawsuit.

The drug problem is so bad in our major cities that TV programs like “Dope” and “Drugs Inc.” are becoming popular. Camera crews follow dealers around the city as they operate open-air drug markets. No wonder a 16-year-old girl in Baltimore can be killed in the crossfire.

The failure to deal with the problem by officials in such cities as Baltimore and Minneapolis has now been extended to people like Mad Dog Mattis, who insists that Trump overreacted in a Nazi-like fashion to peaceful demonstrators. It’s the rioters using Nazi-like tactics. If he can’t see that, he’s as clueless as Joe Biden. One wonders if his lack of real-time intelligence was a factor in America losing wars in the Middle East. If so, his much-vaunted “military service” did not serve America’s interests.

For those serious about saving America, Edwin Vieira, Jr., who has practiced constitutional law, has some very good legal advice. He points out that 10 U.S.C. sec. 253 is the right statute to use, for it authorizes the president to call forth any part of “the militia,” and any part of the Armed Forces (including the National Guard, whether it is called part of “the militia,” or, correctly, State “Troops” under Article I, Section 10, Clause 3, which can be employed as a reserve for the regular Army).

He adds, “There is no requirement under Section 253 that some Governor or other State official approve (which is obvious not only from the text itself but also from the statute’s origin as the enforcement of Section 1 of the Fourteenth Amendment through Section 5 thereof). There are also some very interesting historical parallels that make Section 253 a particularly appropriate vehicle for suppressing insurrections which state and local officials seem willing to tolerate at the expense of their citizens’ rights, privileges, and immunities guaranteed by the Constitution of the United States.”

On Tucker Carlson’s Thursday night show, former CIA officer Bryan Dean said America is “on fire” and that “violent leftist thugs” are running around the major cities attacking and killing people and vandalizing buildings. He compared the situation to the time when communist groups were waging war against America in the 1960s and 70s.

He said he thinks the Department of Justice and our police forces understand the situation. Some clearly do, such as the Minneapolis police union chief who says that “terrorist” elements had been emerging in the city for some time while the police force was being decimated and denied the ability to confront the threat.

If the DOJ and FBI really understand the problem, they will advise the president about how he has the complete constitutional authority to order the immediate deployment of troops in our major cities, if the National Guard doesn’t suffice.