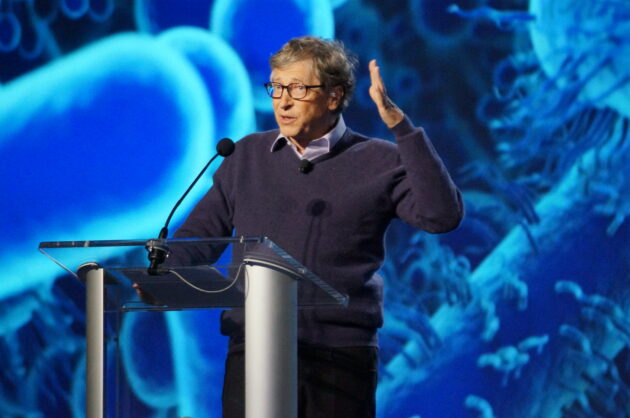 As the virus takes its toll, those of us still in good health and with the ability to think clearly have the duty to explain to our fellow citizens what is really going on. We are living in a global experiment in which “health experts” such as Bill Gates, previously known for software development, have decided to treat us as specimens in a giant fishbowl for study and observation. Many of us will get sick. Many won’t survive.

Gates, co-chair of the Bill & Melinda Gates Foundation and the recipient of an academic award from Chinese communist authorities, has emerged in recent weeks as an “expert” on coronavirus when just a few months ago the media were starting to pay attention to his sleazy involvement with convicted pedophile Jeffrey Epstein. Even the New York Times was on to the story, digging up photos of Gates and Epstein at his mansion. One of Epstein’s associates had been placed at the Gates Foundation.

Epstein was among a group of global elites who shared an atheist belief that scientific advances could help them live forever artificially. It’s not exactly clear what Epstein, Gates, and others were contemplating. But Gates’ relationship began after Epstein was convicted of sex crimes.

More recently, Gates has emerged as a Trump critic and big backer of the U.N.’s World Health Organization. But to almost everyone except those blinded by their hatred of President Trump, it is becoming painfully obvious that both Red China and the World Health Organization (WHO) are implicated in what John West, executive director of the Asian Century Institute, calls “the greatest disaster and blunder the world has seen since the Second World War” – the release of the coronavirus and attempts to cover-up its lethal nature and killing potential.

The use of the term “blunder” assumes the virus leaked out of China, or a lab, by accident. That’s not necessarily the case. In any event, West writes that, “The COVID 19 crisis has highlighted the bankruptcy of China’s authoritarian governance which not only greatly facilitates cover-ups and fake narratives, but in that process evidently puts the health of the world’s population at risk.” He suggests pursuing the Australian government proposal for an independent international inquiry “on the origin and handling of the COVID 19 crisis, including the role of the WHO…”

While there is some merit to this idea, what is also required is a serious examination of those in the global elite class who have made it possible for China to conduct human biological experiments that threaten our humanity and survival.  As I recently noted in a column titled, “A Frankenstein Monster Devouring the World,” the Human Genome Project opened the door to a Communist Frankenstein project of human genetic modification and manipulation when a Chinese scientist went public in November 2018 with the news that he had created the world’s first genetically-altered babies. The Chinese authorities were not prepared for this public admission at that time and sent the scientist to prison for speaking out of turn.

As we know, there was a Nazi Germany government plan to eliminate its “unfit” members and create a master race. Between 1939 and 1945 the Nazis systemically murdered as many as two hundred thousand mentally ill or handicapped people. These were, of course, a small part of the Nazi “race purification” campaign that eventually took the lives of six million Jews.

The Chinese Reds are the new Nazis, deciding what constitutes “life unworthy of life.” This may sound harsh, but the fact is that they can easily spare millions of their own people while millions more will also die around the world. We are seeing the impact all around us, as millions get sick or die and an economic depression has taken root as power-hungry local and state governments take control of our personal lives.

As the entire world suffers as a result of China’s malfeasance, this actually appears on the website of the Bill Gates Foundation office in China: “We are working to support China as it takes on a more active international role, leveraging its policy, experience, resources, and know-how in health and development for the benefit of the world’s poorest, especially those living in the Sub-Saharan African region.”

The U.N.’s World Health Organization, which originally claimed the virus was harmless to humans, says 3.3 million people in Africa could die from COVID-19, and 1.2 billion could become infected.

Despite what has become painfully obvious to observers such as John West and many others, Gates remains in China’s cheering section. The Chinese Ministry of Foreign Affairs informed the world on February 20 that President Xi Jinping wrote a letter in reply to Bill Gates, “thanking him and the Foundation for their support for China’s fight against the novel coronavirus disease (COVID-19) and calling for enhanced international coordination and concerted efforts against the outbreak.”

This was in response to the Gates Foundation on January 27 committing $5 million in “emergency funding to support China’s fight against COVID-19,” and later pledging up to $100 million for China. The Chinese Ministry of Foreign Affairs said, “In his recent letter to President Xi, Bill Gates commended the Chinese government and people for the strong epidemic response and expressed firm support to China in prevailing over the outbreak.”

This is simply incredible, even criminal. China releases the virus, covers it up, and then claims it is under control, which it wasn’t. How is this supposed to be praiseworthy or exemplary?

The virus eliminates people through suffering and death, while the Gates China office previously was working with the U.N. to cut back on the number of people in Africa actually being born. The Gates Foundation invested in Levoplant, a three-year contraceptive implant made up of hormone-releasing silicon rods that are inserted under the skin. The rods are manufactured by Shanghai Dahua Pharmaceutical Co. and the device quickly got preliminary approval from the WHO. Side effects include changes in menstrual bleeding, headaches, dizziness, nervousness, weight gain, nausea, vaginal discharge, lower abdominal pain, cervical inflammation, itching of the external genitals, and breast tenderness.

The United Nations Population Fund (UNFPA) has introduced Levoplant throughout Africa, offering it free of charge. According to one doctor, there is a pressing “need to control the country’s increasing population due to scarce resources and non-existent social services.” In other words, rather than encourage people through free enterprise to develop their own resources and take care of themselves, and to develop responsible governments, it’s better that they weren’t born in the first place.

This is the U.N. agenda – population control and reduction. It has come to America.

One gets the impression from the global elites that they believe that there are just too many of us and that we are getting in the way of their plans by exercising our rights.

Indeed, another global elitist, Mark Zuckerberg of Facebook, has announced that Americans who use the social media platform to organize protests in favor of reopening their businesses, thereby violating government guidelines, will be banned.

Our rights and our lives are at stake.