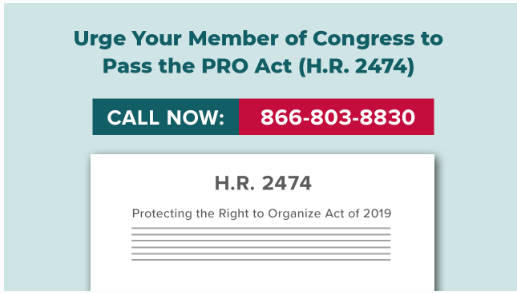 UAW’s website/Steeleworkers/AFLCIO and more promoting the passage and it did in the House….

Last week, the Democrat-led House of Representatives passed a bill designed solely to empower the Democrats’ Big Labor allies. While the bill has little chance of becoming law with Republicans in control of the Senate, the deceptively named Protecting the Right to Organize Act (“PRO Act”) is a dire warning of what Democrats would do should they ever return to power.

Voters should pay close attention to its provisions. Despite severely negative economic consequences, Democrats would eviscerate both the rights of employers to oppose unionization and of workers to decline union membership through the PRO Act – effectively turning the right to unionize into compulsory unionization.
There is no doubt that the PRO Act represents Democratic Party orthodoxy. It passed the House in a 224-194 vote (mostly along party lines). The Bill’s Senate version has 40 co-sponsors, none of whom are Republicans.

While couched as workers’ rights legislation, the PRO Act is a tacit acknowledgment that the Democrats’ Big Labor allies have a serious problem: workers just aren’t very interested in what the unions have to offer. When the Bureau of Labor Statistics (“BLS”) began reporting the data in 1983, union membership stood at 20.1 percent of US employees. That percentage has steadily declined ever since and, in 2019, dropped to 10.3 percent.

Dwindling union membership means declining revenue and political influence. So, the Democrats, who depend on union endorsements and union dues to support their political campaigns, are advocating policies that essentially eliminate the option of going non-union.

Perhaps most tellingly, the PRO Act would eliminate Right-to-Work laws nationwide, an important means for workers to hold their unions accountable and a critical protection for workers who do not want to financially support a political organization with which they disagree. As a result, the PRO Act would force workers in the 27 states that currently have right to work laws into unions, compelling them to pay union dues, despite their desire to remain independent.
The bill would also eliminate the right to a secret ballot in union elections, forcing workers to vote in front of union organizers and colleagues via “card check,” a system that both sides of the aisle have condemned. It would also infringe on workers’ rights to privacy, requiring employers to hand over employees’ personal information, including home addresses, emails, phone numbers, and work shifts, to union organizers, needlessly exposing those employees to harassment and intimidation.
One of the bill’s worst provisions would broaden the “joint employer” standard to include potentially any business that contracts with another, including franchisees, suppliers, vendors, or subcontractors. Joint employers are equally liable for each other’s employment violations, and this increased risk will force big companies to stop franchising or contracting with smaller companies to avoid expanded liability.

The Obama administration tried to force through the same standard, but its efforts met bipartisan opposition in Congress, and the Trump administration rightfully abandoned the effort.

Nonetheless, unions and their paid-for politicians are trying to force through the standard to give unions access to larger and supposedly “joint” workforces rather than requiring them to organize these smaller independent businesses one by one.

Similar to California’s AB5 legislation, which is set to wreak economic havoc in California’s economy, the PRO Act would steal American’s right to work independently by making it nearly impossible for workers to qualify as independent contractors – workers without a traditional employer. These workers are critical for the “sharing economy,” an industry composed of app-based technology companies like Uber and Lyft that connect independent workers with consumers.

This new economy is flourishing because it fills a gap in currently available services. Rather than supporting this new industry that provides additional income and flexibility to workers who choose to participate, Democrats want to stop it in its tracks. Why? Because – and only because — unions can’t organize independent workers.

The center-right American Action Forum’s economic analysis of the PRO Act’s potential impact on the economy is reason alone to abandon it. AAF found that the PRO Act’s joint employer provision could annually lead to $33.3 billion in lost output for the franchise business sector alone. The bill’s independent contractor provision is expected to add up to $12.1 billion in annual costs for employers and implicate 8.5 percent of GDP. And these are the costs of only two of the bill’s dozen provisions.

Despite the negative economic consequences, should Democrats return to power in the upcoming election, their socialist goal of compulsory unionization would soon supplant the rights of employers to oppose unions and of workers to reject them.

As the PRO Act demonstrates, Democrats will readily eviscerate those rights and slow our economy if doing so can but grow Big Labor’s coffers and political influence.

The upcoming election is increasingly a choice between economic freedom and prosperity or government compulsion and stagnation.