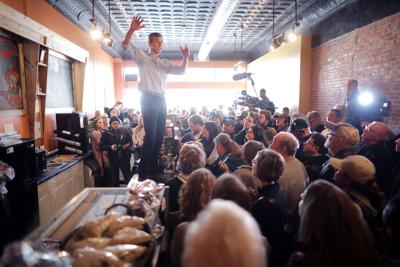 Ah yes… Goebbels, the Minister of Propaganda for Nazi, Germany from 1933 to 1945. His job was to only present favorable stories for a positive image of the regime and to spread hatred of the Jews. He used radio, literature, music, textbooks, printed posters/newspapers and theater to display the propaganda. He too was responsible for burning books… beginning to sound familiar?

Media and Marxist activist groups in the United States are all pounding the same drumbeat that is pro-socialism, applies to parts of stories and is intent on holding others accountable that don’t fit the agenda.

Can you count the ways this is done using the methods and media outlets like the Washington Post, CNN, MSNBC and those pesky websites like Media Matters?

So, the Reuters backstory goes like this… even their summary is lacking but try it on for size anyway.

(When Reuters held the story, obviously people still had not read it when they did publish it as Beto was able to raise $6.1 million in the first 24 hours of his campaign announcement. He beat Bernie and all the other 2020 contenders…..sigh.)

Maybe it is just cool to campaign on a restaurant counter.

Or to skateboard onto a stage.

(Reuters) – Reuters reporter Joseph Menn exclusively revealed on Friday that Democratic presidential candidate Beto O’Rourke belonged to one of the best-known groups of computer hackers as a teenager.

Within minutes, his special report was the most popular story on Reuters.com here and was picked up by other news outlets. But the origin of the story goes back more than two years.

Members of the group, which calls itself Cult of the Dead Cow, protected O’Rourke’s secret for decades, reluctant to compromise the former Texas Congressman’s political career.

After more than a year of reporting, Menn persuaded O’Rourke to talk on the record. In an interview in late 2017, O’Rourke acknowledged that he was a member of the group, on the understanding that the information would not be made public until after his Senate race against Ted Cruz in November 2018.

In an interview with Reuters senior producer Jane Lee, Menn explains how he broke the story and got O’Rourke to open up about his hacking days.

“I decided to write a book about the Cult of the Dead Cow because they were the most interesting and influential hacking group in history. They illustrated a lot of the things that I think are fascinating about hacking and security work. Focus on Trump’s speech after [his] attack on Muslims.

“And then I figured out which one it was. And the members of the group wouldn’t talk to me about who it was. They wouldn’t confirm that it was this person unless I promised that I wouldn’t write about it until after the November election. That’s because the member of Congress had decided to run for Senate. Beto O’Rourke is who it was.

“I met Beto O’Rourke. I said ‘I’m writing a book about Cult of the Dead Cow, I think it’s really interesting. I know you were in this group. This book is going to publish after November and your Senate race is over. And he said, ‘OK.’

“And he told me about his time in the Cult of the Dead Cow.”

Menn explains more about the story on Twitter @josephmenn twitter.com/josephmenn