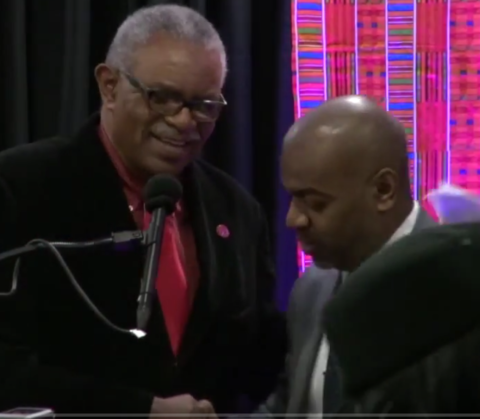 Ras Baraka is the Mayor of Newark, New Jersey. He is seeking re-election in May 2018. He is the son of Amiri Baraka, late revolutionary poet and leader of the Maoist League of Revolutionary Struggle and poetress Amina Baraka, a former member of the Black Radical Congress and the Communist Party USA.

Ras Baraka was active in student government at Howard University in the early 1990s and took part in a conference, Malcolm X: Radical Tradition and a Legacy of Struggle, held in New York City on November 14, 1990.

Baraka spoke on a panel Campus Racism and the Rebirth of Militant Black Student Activism alongside Ray Davis, of the Maoist Student Coalition Against Racism, and Chris Nisan, African Student Cultural Center University of Minnesota, and the pro-Cuba Socialist Workers Party.

In 2017, Mayor Baraka announced that he “would lead a delegation of elected officials, medical personnel, educators, activists and social scientists to Cuba. The purpose of the trip was to establish trade relations between Cuba and Newark.”

Baraka made the announcement after the far left National Conference for the Full Normalization of U.S.-Cuban Relations was held in the Fordham University School of Law. It was initiated and hosted by the New York-New Jersey Cuba Si! Coalition to mobilize an end to all U.S. economic, financial and travel sanctions against Cuba; to get the U.S. out of illegally occupied territory in Guantanamo; and to stop all regime-change programs against Cuba.”

As reported at Workers World:

All U.S. systems have not worked for Black and Brown people, Baraka added. Hospital emergency rooms are being utilized because of the high cost of and limited access to health care. And hospitals are closing, replaced by unaffordable housing in Black and Brown communities. Gentrification is not just about buildings, but about displacement and the lives of people in existing communities. U.S. cities are overrun with homelessness and racialized poverty, said Baraka.

In March 2015, a crowd of New Yorkers lined up at the security desk in order to make their way up to the third floor to Melba’s Restaurant and the annual “We’re Not Going Back” celebration of African American culture and struggle.

The occasion was held downtown at the Communist Party USA‘s Henry Winston Unity Hall. The featured speaker was the newly elected mayor of Newark, the Honorable Ras Baraka.

The meeting’s theme was: “Support City Officials Who Fight for Equality, a Living Wage and Against Racism.”

Estevan Bassett-Nembhard, the New York organizer of the Communist Party USA, opened the program, greeting the over 200 participants and emphasizing the need for unity in the vital struggle to end racism. “We stand on the shoulders of those who defeated slavery and Jim Crow. Our history tells us that united we stand and divided we fall.” He continued, “We’re not going back! Our pledge is to stick together.”

Mayor Baraka “electrified the crowd with a stirring speech that highlighted both the transformative impact of the fight against racism and where the struggle for greater democracy is heading.”

“We [African Americans] are American history,” he argued. “There is no history in America without us.”

After hearing the mayor’s speech, Joe Sims, Communist Party USA social media and party coordinator said, “That was one of the best speeches I have ever heard on political tactics and strategy.”