By: Roger Aronoff | Accuracy in Media 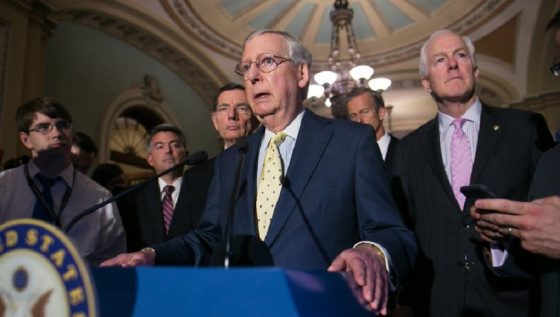 While the media are enjoying what they say is Republican hypocrisy over their process to pass a Senate version of a bill to repeal and replace Obamacare, there is little attention being paid to the substance of the debate. President Donald Trump didn’t help matters when he muddied the waters, first saying that the House version of the bill, which he had enthusiastically supported, was too “mean,” and now saying he wants the Senate version to have “more heart.” Senate Majority Leader Mitch McConnell has promised reporters a “discussion draft” of the bill later this week. In the meantime, Sen. Bernie Sanders (I-VT) and many Democrats are blasting the bill as heartless and cruel. The toxic political atmosphere is not making matters any easier.

When former President Barack Obama spoke before a Berlin audience last month, he defended his signature legislative achievement, Obamacare, as having helped to insure 20 million people previously uninsured, and allegedly bettering the lives of millions of Americans. The media continue to portray such progress, of course, as imperiled by Congressional Republicans in league with an uncaring Trump who are currently locked in a debate over the merits of—and possible reforms for—a law that progressives believe must be protected.

“Certainly, I have some regrets that we weren’t able to get everyone healthcare, and obviously some of the progress that we made is now imperiled because there’s still a significant debate taking place in the United States,” said Obama in Berlin. “But the point, though, is that for those 20 million people their lives have been better and we’ve set a standard of what’s possible that people can then build on.”

How many lives have been made worse? The standard set by Obamacare has been one of skyrocketing premiums, high deductibles, and undercutting business owners’ willingness to hire full-time workers. As we have previously noted, Mort Zuckerman, the chairman and editor of U.S. News and World Report, writing for The Wall Street Journal, argued that “Many employers cut workers’ hours to avoid the Affordable Care Act’s mandate to provide health insurance to anyone working 30 hours a week or more.”

We have reported on how the mainstream media sought to protect Obamacare and influence the Supreme Court’s decision regarding health care subsidies—a decision which could potentially have gutted Obamacare. Soon there will be a new Congressional Budget Office (CBO) score of the Senate version which will, as with the House version, be held up as proof that the bill will lead to higher costs and less health care.

“Republicans have often knocked Obamacare for having such high deductibles that enrollees don’t really have coverage even though they have an insurance card,” reported CNN. “The CBO notes that under the GOP bill, many older Americans and those who use services that were no longer covered would find themselves in the same boat.”

Of course, CNN is casting past complaints about Obamacare as Republican propaganda rather than fact. But even The New York Times published an article about how Americans couldn’t afford their deductibles under Obamacare.

Guy Benson of Townhall called the media and CBO out for the false numbers and fake news. “In short, the large bulk of those who are said to be ‘losing’ coverage do not currently have coverage,” he writes (emphasis in original). “You cannot ‘lose’ something that you don’t have.”

It all comes down to how the CBO counts the insured. “So when you take away the people who already don’t have coverage under Obamacare but who CBO has decided would hypothetically do so in the years ahead, and substitute actual enrollment numbers for CBO’s outdated and disproven projections, only a few million of the ‘23 million’ would actually lose existing coverage—and these people would receive tax credits to purchase new plans, many of which would cost less under the AHCA,” writes Benson (emphasis in original). He adds, “We should also point out that millions who’d ‘lose’ coverage would do so voluntarily, affirmatively choosing not to buy a product that the government is no longer forcing them to purchase.”

Doug Badger and Grace-Marie Turner made a similar observation in a Forbes article discussing the findings of their recent paper. “Although CBO itself acknowledges that this latest prediction is ‘especially uncertain,’ one thing is especially certain: CBO is wrong,” they write. The former is a senior fellow at the Galen Institute, and Turner is the president of that institute. The CBO report on the health care bill states that “the estimates discussed in this document are uncertain.”

According to Turner and Badger, the CBO has repeatedly made errors when predicting the number of people who would enroll in Obamacare: “No matter, CBO forecasts that this year, 15 million people will sign up for Obamacare policies. The actual number as of March 31: 10.4 million, little changed from December. But there’s always next year when, CBO assures us, enrollment will abruptly skyrocket to 18 million.”

They write that the CBO report measures the health care bill against this erroneous and “imaginary baseline.” In other words, CBO is scoring the House bill against fictional predictions in order to cast the bill as wanting.

“The presumed 8 million reduction in the number of people with individual insurance looks more like an artifact of inflated coverage estimates than the consequence of Obamacare repeal,” write Badger and Turner.

Nonetheless, the media have used these numbers to bludgeon the Trump administration for imperiling and potentially harming Americans. Slate ran with the headline, “CBO Confirms That the Republican Health Care Bill Is Still a Garbage Dump of Bad Ideas.”

“Republicans have mostly just rearranged the rusted cans and busted tires in their garbage dump of a law,” comments Jordan Weissmann for Slate.

One reason the CBO “gets it so wrong so consistently,” according to Badger and Galen, “is its fervent belief that the individual mandate has motivated millions to enroll in coverage.” But, they report, “…4.2 million people simply ignored the penalty. They left line 61 on their form 1040 blank, refusing to tell the government whether or not they had insurance.”

There is confusion among the senators at this late date as to who is actually writing the bill. A lot of conservatives in Congress will likely hold their noses and vote for the new legislation, to try to give the Republicans a needed win. They don’t believe it is the role of the federal government to guarantee that everyone has health insurance, and to then try to redistribute wealth to help pay for it. But we’re well past that discussion.

Those in the media claiming that 23 million Americans will lose health care coverage under the House bill are simply trying to protect Obama’s legacy, regardless of how flawed or ineffective Obamacare has been since it became law. Once again, the media publish fake news in support of the Democratic Party and its agenda. Remember this when the new CBO figures come out next week.

Roger Aronoff is the Editor of Accuracy in Media, and a member of the Citizens’ Commission on Benghazi. He can be contacted at roger.aronoff@aim.org. View the complete archives from Roger Aronoff.

3 thoughts on “Can the GOP Pass a Healthcare Bill in the Current Environment?”