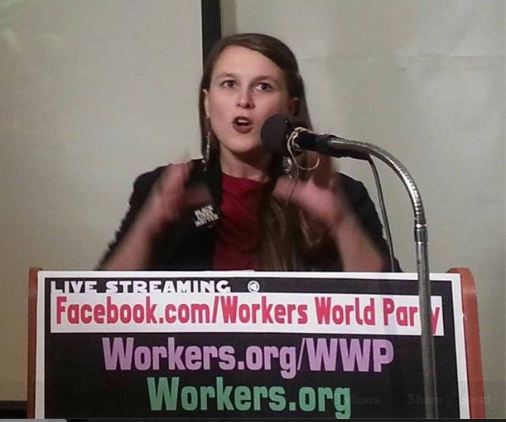 Taryn Fivek is a New York City based activist and member of the pro-North Korea, Russia and Iran Workers World Party.

She was educated at the University of Central Florida and the School of Oriental and African Studies, London.

In recent years, she has worked as a press agent for the United Nations partner agency International Organization for Migration on Syrian refugee resettlement into Canada.

She has worked in Iraq, Jordan, the “occupied Palestinian territories,” the United Kingdom, Qatar and Germany.

Prior to that, Taryn Fivek was Assistant Internal Organizer to the New York Hotel Trades Council, AFL-CIO, an Events and Content Strategy Assistant for The Economist and a Programme Development Officer for the Palestinian Center for Peace and Democracy.

In recent months, Fivek has been a leader of the anti-Trump protest movement, J20;

J20 organizers are calling for people to gather at what they are renaming “Anti-Columbus Plaza” in front of D.C.’s Union Station at 6 a.m. on Jan. 20. A march on the White House will begin at 10 a.m.

The cops and agencies of the state are trying to stop people from saying “No to Trump!” Racist cops love Trump, who called Mexican immigrants “rapists” and who wants to crush the Black Lives Matter movement.

Ludicrous limits are being set to attempt to stop demonstrators. Among the items the cops are trying to prohibit at checkpoints are backpacks, balloons and even signs larger than 8 by 6 by 4 inches — about the size of half a sheet of typing paper!

“Many restrictions are vague, all-encompassing, contradictory and open to police interpretation,” said New York J20 organizer Taryn Fivek. “All are intended to restrict people’s freedom of assembly, freedom of speech and freedom of expression.”