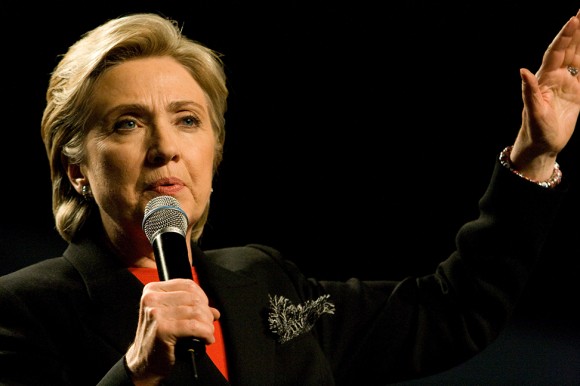 Hillary Clinton’s excuses regarding her private email server were immediately exposed as lies when Sidney Blumenthal provided additional emails to the Select Committee on Benghazi, ones that she herself had not provided to the State Department.

Blumenthal “was faced with a dilemma when he went to the Committee,” said Aronoff on the show. He added that if Blumenthal had withheld the emails that made clear that Mrs. Clinton hadn’t turned over all of her work-related emails to the Committee, he would have been risking being held in contempt by the Committee.

“So what we know is that she provided edited material, she didn’t provide all the material—and so she’s caught in these lies,” said Aronoff. He also noted that some of her messages are now classified.

“But none of this with the apparent nominee for the Democrats,” said Aronoff. “There’s no—very little interest [from] the media in digging into this and talking about this.”

This scandal has a twin counterpart in the conflicts of interest posed by the Clinton Foundation, another story the mainstream media have either not pursued or attacked. “So what they ended up doing was through the Clinton Foundation…that when Hillary was Secretary of State they would take millions of dollars from countries who were doing business with the U.S. government,” he said. “And, again, everyone just wants to act like she’s just above all that, that there’s no way she would do anything. But yet she gets caught in lie, after lie, after lie…”

Aronoff argued that since there is no controlling legal authority willing to hold Clinton accountable at this time, the consequences for her may be more political than legal, especially if Vice President Joe Biden were to jump into the Democratic presidential primary. “I think the Clintons believe it’s their time and their entitlement to have that position,” he said, “and if they see the Obama administration all of a sudden line up behind Biden, whether openly and overtly or kind of behind the scenes, I think it’s going to be a real battle in the party.”

While the Select Committee is currently focused on accessing Clinton’s and her staff’s emails, no further information is necessary to expose the ongoing Benghazi cover-up by the Obama administration and Mrs. Clinton. “We put out a report a year ago April, and people can go look at this,” said Aronoff. “It’s at aim.org/Benghazi, and see what the real story is.”

The Citizens’ Commission on Benghazi’s interim report details how the initial intervention in Libya was unnecessary, that Muammar Qaddafi offered truce talks that the U.S. did not pursue, and that the U.S. government was facilitating the provision of arms to al-Qaeda-linked rebels in that nation.

CCB Member and former CIA officer Clare Lopez recently explained to WorldNetDaily that when Ambassador Chris “Stevens was facilitating the delivery of weapons to the al-Qaida-affiliated militia in Libya, he was living in the facility in Benghazi that was later designated the Special Mission Compound.”

You can listen to the complete interview here.