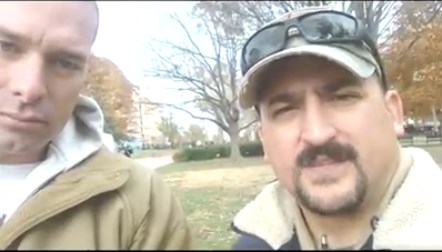 Patriots have been maintaining a vigil in Washington D.C. in response to President Obama’s executive order on illegal immigration, an unconstitutional and unprecedented act that will result in a surge of illegal aliens at the Mexico-America border, as reported at Broadside News.

The group 2 Million Bikers to DC (2MB2DC) has been updating their followers on the progress of Blaine and Manny, who have been joined by the Liberty Belles of America and others.

On Thanksgiving, Blaine Cooper posted an emotional video on Facebook, explaining why patriots have left their families to take a stand against President Obama along with Manny E. Vega, a Marine Corps veteran who served three combat tours in Iraq.

On Thanksgiving day, Manny posted the following on Facebook:

Good afternoon folks, I hope you are enjoying your day with family. We will be going to volunteer at a kitchen here in Washington. We will be out here again in the morning. I truly hope that more fellow patriots come out in the coming days. Only six in front of the White House. Thank you for your support.

Americans are overwhelmingly against illegal immigration, and the Republican establishment is not representing the people. So what can you do?

In addition to the above steps, Bachmann has requested that Americans call their representatives. A list of Senators with their telephone numbers can be found here.