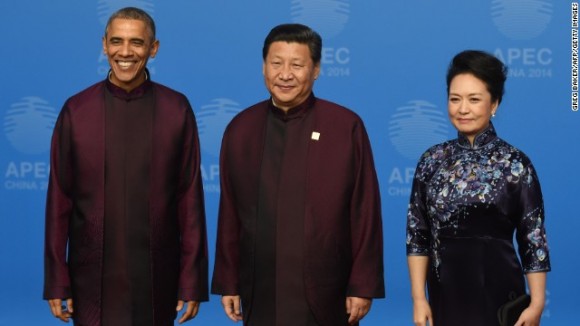 The press is reporting that Communist China has engaged in more computer hacking, this time of employee data at the U.S. Postal Service. But don’t worry. The Washington Post reports that the Obama administration has “strongly urged” China to “refrain” from hacking.

Meanwhile, CNN is covering the “controversy” over whether Obama chewing gum at the Asia Pacific Economic Cooperation (APEC) summit in Beijing has offended some Chinese.

No attention in the latest computer hacking scandal has been given to the fact that National Security Agency (NSA) defector Edward Snowden’s disclosures included documents on NSA surveillance that have clearly benefitted the giant Chinese telecommunications firm, Huawei, an instrument of Chinese espionage and an NSA target.

In a 2012 report, the House Intelligence Committee had called Huawei a threat to U.S. national security interests.

Those NSA documents, which could give the Chinese a significant advantage in the cyberwar between the U.S. and China, went to The New York Times. But other stolen and highly classified NSA documents went to Barton Gellman of The Washington Post, with the transfer arranged by Snowden collaborator and accomplice Laura Poitras.

Chinese computer hacking attacks have been increasing for some time, but in May the U.S. Department of Justice was forced to indict five Chinese military hackers for computer hacking, economic espionage and other offenses.

The milquetoast response from the Obama administration to the latest case of Chinese hacking illustrates the nature of the problem we face today. But it gets far worse than losing data and spending billions of taxpayer dollars on cyber defenses. In the case of Dr. Shane Truman Todd, who was working on a project in Singapore involving Huawei, it cost him his life. He was murdered just before he was scheduled to return to the United States.

The case has gotten a lot of media attention over the last two years, much of it featured on a Justice4Shane Todd website. Still, Mary Todd and her husband Rick cannot get either Congress or the Obama administration to take up the cause of their murdered son and hold his killers accountable.

Mary Todd says Shane “felt that he was being asked to compromise U.S. security” by transferring sensitive illegal Gallium Nitride (GaN) technology to China through his work for a Singaporean firm, IME. GaN is a semiconductor material that can be used in electronic warfare. She said that Shane quit his job and had a new job waiting for him in the United States. “The last day of his work, he was murdered and hung on a door,” she said.

The title of their book, Hard Drive, is a reference to a computer hard drive found after his death that documents the relationship between IME and Huawei, and the nature of the technology and its military applications.

Pictures of the young man after his death showed he had defensive wounds, making the official claim of suicide impossible to believe.

Developments in the case have accelerated the cover-up, Mary Todd told me in a recent interview. For example, she said that this summer a court in Singapore destroyed DNA evidence on the towel and strap found around her son’s neck. The DNA was Malaysian and Chinese. There was no DNA on the knot, meaning the person who tied the knot was wearing gloves.

Yet, the U.S. State Department still goes along with the claim that Shane Todd somehow committed suicide.

“Our country has been sold out for money and power,” says Mary Todd. “China has bought out our government.”

Shane Todd’s cousin, Christina Villegas, the co-author of the book, tells me, “We realized that our own government was putting power and political expediency over protecting the very citizens it’s commissioned to serve.”

The Todds have not been without supporters in Congress. She said she and her husband had met with Rep. Frank Wolf (R-VA) about her son’s murder, and that he was very sympathetic. However, he warned her about the ability to get to the bottom of the scandal, saying, “Mary, think about Benghazi.” This is the scandal involving the deaths of four Americans in Libya and an ongoing cover-up by the Obama administration.

Mary Todd says Wolf told her, “You are doing the right thing to press for a congressional investigation, but you are not going to get anywhere.”

Shocked and bewildered, she asked, “Why not?”

He replied, “Huawei has a law firm on every corner in Washington D.C. and has helped elect several current members of Congress.”

Mary Todd writes that she couldn’t believe what she had been told and said to herself: “Does China really have that much influence over our country’s political decisions?”

She says Wolf tried to help by asking the FBI to pursue evidence in the case.

Then-Senator Max Baucus (D-MT) tried to help as well, at least at first. But Mary Todd, who lives in Montana, says the assistance eventually dried up. When she asked for the senator’s help in getting some documents in the case and for the FBI to meet with them, the Baucus staff aide, Laura Rauch, said that the senator “would be unable to assist with this request.”

Mary Todd adds, “Later that afternoon, we discovered from a news report that Baucus had been appointed Ambassador to China by President Obama.”

She says Obama himself became aware of her son’s case, and that Vice President Joe Biden was given a 20-page report on the fallacies in the official Singaporean inquiry. “I believe the cover-up is from the very top,” she says.

Christina Villegas told me, “[Secretary of State] John Kerry met directly with the foreign ambassador of Singapore regarding my cousin’s case and it seemed that after that meeting, congressional interest in the case also began to wane.”

Yet, they persist in their efforts to seek justice. In an open letter to the media and elected officials, Mary and Rick Todd write that they intend to “use our son’s murder to alert ordinary citizens and elected officials of the dangers associated with the illegal transfer of technology and to show how far some foreign companies and governments will go to protect clandestine work or international reputation.”

Rep. Wolf, who is retiring from Congress, writes in the book, “I appreciate the Todd family sharing this important story with the American people about how certain foreign actors, especially Chinese companies like Huawei, should be viewed with suspicion and concern. It’s important for Congress to ensure that the federal government does all it can to protect national security and the safety of Americans, both at home and abroad, when challenged by foreign influences, especially countries like China that steal our technology and don’t share our values. We should all keep Dr. Shane Todd’s story and the Todd family’s experience in mind as we consider future cooperation with certain countries and companies.”

The book is subtitled, A Family’s Fight Against Three Countries. Those countries are Singapore, China and the United States.

“Our country is in trouble,” Mary Todd says. “Look into what is happening within our government. It is an atrocious situation that we need, as a country, to stop.”

3 thoughts on “China, Hacking and Murder”