Birthdays … Celebrated in so many different ways. Some people go to extravagant lengths and plan explosive and fun birthday parties while others sit in solitude by themselves.

Many parents try to come up with unique and different ways to celebrate with their children but as we get older, the significance changes.

Birthdays were never a big thing for me as I grew up. Having a birthday in July, we were always on vacation and I can’t remember how many birthday pictures I have at a state line in front of another sign welcoming me into someone else’s great state. I would stand in front of the “Welcome to my wonderful state sign” with my single birthday present.

Secretly, I think we all hope someone will throw a surprise party sometime in our life, bringing together everyone we know. I’ve never experienced it, but I can tell you today was the most unique and exciting birthday I have had. 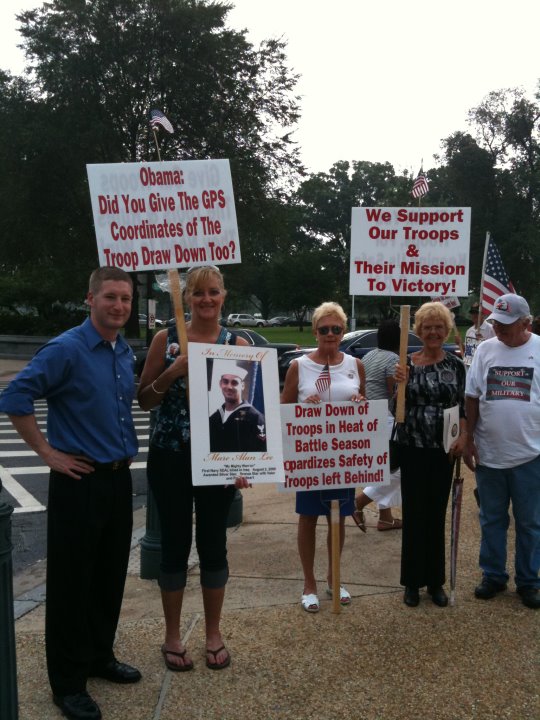 I traveled to DC this past Thursday to do one of the things I do best, support our troops, honor them and wage war against anybody who doesn’t treat them right.

Our men and women who have served and are serving are the best America has to give. Their selfless sacrifice, commitment and perseverance is like none other.

Since I arrived, I have visited our wounded warriors at Walter Reed and Bethesda; attended Armed Forces committee meetings and hearings’ met with members of Congress about issues pertaining to our troops, and stood outside the Cannon Building, across from the Capitol with other patriots who support our troops, holding signs supporting our troops and my hero sign with Marc’s picture on it. It’s hard to believe in just a few days it will have been 5 years since My Mighty Warrior gave his life defending his buddies.

I’ve come to know Dan, one of the Capitol Police who works on the corner by the Cannon building through the years as I’ve stood on the corner honoring our troops and fighting for what they need to successfully complete the mission.

When we arrived on Monday, he let everyone else know my birthday was on the 26th. He baked brownies for my birthday and had a group of young patriots come up to me and tell me Happy Birthday. All the patriots who were standing with me on the corner told me they were taking me to dinner tonight. It feels so special to know there are people who care and appreciate you.

I’m blessed when I stand on that corner to meet so many members of Congress who have become my friends through the years and I am still excited to do it because I never know who I will meet.

One of the distinguished people I have met through my travels supporting the troops has been Ambassador Bolton. I saw him walking down the sidewalk and went over to say hello. We chatted for a few minutes and then he was on his way.

As I went to pick up my sign, I noticed Medea Benjamin and her Code Pink cronies approaching Ambassador Bolton. This couldn’t be good I thought to myself. She introduced herself and it wasn’t long before she started her rant.

They had their bullhorn with them and they started ranting about Ambassador Bolton being a war criminal. Criminal … These are the same despots who gave $600,000.00 to the terrorists in Fallujah, and they have the audacity to accuse Bolton of a crime.

They should be prosecuted and punished to the full extent for treason. The Code Pink wackos started to surround Ambassador Bolton screaming over and over, he was a war criminal.

I went up to him and put the two signs I had between Bolton and the Code Pink loonies, sheltering him from these vile and despicable individuals. Soon Bev Perlson from the Band of Mothers, and Chad Longel a longtime supporter and Army Vet did the same protecting Bolton from the antics of these attention seeking hippies who hate our military.

Ambassador Bolton was waiting for his driver who was delayed in traffic and he was so thankful we had come to his defense. We were right on the curb and had surrounded Bolton so they would have had to step out in the street to be right in front of him. They continued to yell on their Bull horn for a Policeman to come arrest Bolton for war crimes.

They drowned out my voice as I yelled at them that they were the ones who should be arrested for treasonous acts in supplying and aiding the enemy.

The lone man in their group came up next to me and tried to shove the sign I had with Marc’s picture on it out of the way so he could confront Bolton. I won’t stoop to their level and start something with these despicable, ranting lunatics, but I won’t back down from them either. 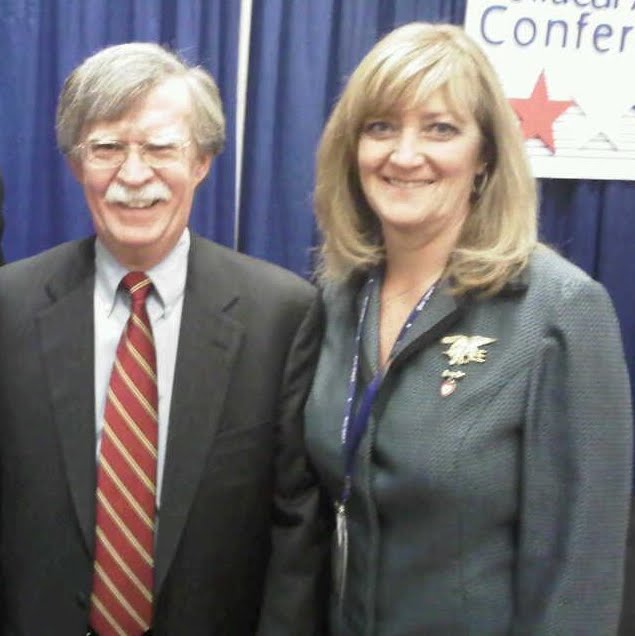 When you start messing with the picture of my fallen brave warrior son, you’ve crossed the line and you’ve done made me mad. He was probably 4 inches shorter than me, (that’s when I love God gave me extra height! :O) I forcefully planted my feet and looked him in the eye and said with the forceful fear of a warrior…..DON’T TOUCH MY SIGN!

I’ve confronted Code Pink on numerous occasions and had gone toe to toe with this wacko several times before. He had been removed from a press conference I had done at the National Press Club and afterwards the security said they have only had to remove people twice in 5 years and he was one of them.

In the middle of the press conference, he removed his shirt and underneath revealed a pink replica of the Marine dress uniform jacket and said he had served. Yeah, rigggggght!

Bolton continued to thank us, over and over, for standing with him until his ride arrived. He was stunned at how wacko these pathetic individuals were.

Again, the deranged dude grabbed my sign and tried to shove me out of the way.

Obviously he doesn’t understand you won’t win if you mess with the Mother of a fallen SEAL. “I TOLD YOU DON’T MESS WITH MY PICTURE OF MY SON OR TRY TO SHOVE ME!” I anchored myself and prepared for battle, just then my Capitol Police bodyguard stepped between the protestor and me and told him if you want to push something, push me.

Are you kidding me? If I would have hit him with my sign, trust me, he would have known it.

“She didn’t hit you” replied the policeman.

We were then surrounded by more Capitol Police who had been alerted of the incident. We had a permit to be on the corner and gather so they herded the animals off of the corner.

No sooner did they send them on their way when they turned around and started our direction again. Stupid is as stupid does … We closed in tight and provided security again for Ambassador Bolton and prepared for another onslaught of their crazy antics. The Police surrounded them again and told them to leave or face arrest. They were escorted off in the other direction and this time didn’t return.

Finally Bolton’s driver arrived and he took off his jacket to get into the long-awaited safety of the vehicle. . He started to get into the car and came back one more time to thank us for standing and protecting him from the treasonous code pink crazies.

My patriots Bev, Chad, Jeannie and Jim took me to dinner to celebrate my Birthday and we recounted the incident with the Ambassador and Code Pink. We all agreed it was an amazing day. This was definitely one of the most memorable birthdays I’ve had and will not soon be forgotten.

I thank God for the years he has given me and I look forward to many more years dedicated to supporting our troops, their families and the families of the fallen through the strength God gives me and the passion Marc inspires.