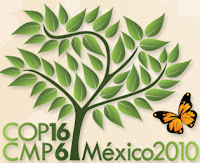 The 2010 United Nations Climate Change Conference is currently being held in Cancún, Mexico. It runs from 29 November to 10 December. It has been stated that 194 countries are represented at the conference – which probably covers every country in the World. A number of the physicists and chemists from such respected scientific institutions as Oxford University and the Met Office attending the conference are agreed that the current plans to solve global warming are not enough. Seeking to “improve” on the 2009 Copenhagen resolution to keep temperature rise below 3.6F, the Cancun conference is seeking to legally obligate countries to cut emissions by 50 per cent by 2050 relative to 1990 levels. Louise Gray at The Telegraph discusses one of the proposals; government rationing of goods, and a halt in economic growth in the “rich world”,

“In one paper Professor Kevin Anderson, Director of the Tyndall Centre for Climate Change Research, said the only way to reduce global emissions enough, while allowing the poor nations to continue to grow, is to halt economic growth in the rich world over the next twenty years. This would mean a drastic change in lifestyles for many people in countries like Britain as everyone will have to buy less ‘carbon intensive’ goods and services such as long haul flights and fuel hungry cars. Prof Anderson admitted it “would not be easy” to persuade people to reduce their consumption of goods He said politicians should consider a rationing system similar to the one introduced during the last “time of crisis” in the 1930s and 40s. This could mean a limit on electricity so people are forced to turn the heating down, turn off the lights and replace old electrical goods like huge fridges with more efficient models. Food that has traveled from abroad may be limited and goods that require a lot of energy to manufacture. “The Second World War and the concept of rationing is something we need to seriously consider if we are to address the scale of the problem we face,” he said.”

I hate to think what they intend to do to “disbelievers” who dare to speak out and say that production and consumption are good things, essential for our well-being and human progress.

5 thoughts on “Rationing Proposed at Cancun”