This is apparently where ourgreat friends, the Communist Party of China indoctrinates its leading cadres and sets the “party line” in place.

The Party School of the Central Committee of the Communist Party of China (CPC) has trained more than 50,000 medium and high-ranking officials since 1978 when China initiated its reform and opening up policy.

All high-ranking Chinese officials, including provincial party chiefs, governors, ministers, generals, as well as mid-ranking officials who just take up their posts, must receive training from this school ranging from 3 months to 3 years.

The curriculums in this institute of higher learning, also known as the Central Party School, include not only Marxism masterpieces and Party principles, but also Western political theory, economics, and frontier issues of contemporary law, religion, military affairs, science and technology. 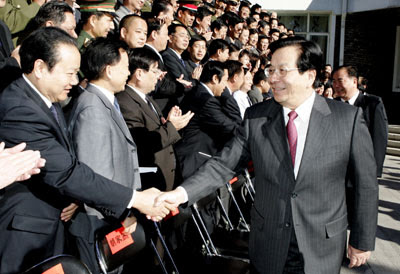 Seminars are held to discuss practical problems they come across during work, including how to increase farmers’ income and ways of getting investment for local development.

“It’s a good experience for me to enhance my ability of public administration through learning how to solve practical problems,” said Mao Linsheng, vice governor of east China’s Zhejiang Province.

The Central Party School was established in 1933 in Ruijin of Jiangxi Province. Chinese top leaders, Mao Zedong and Hu Jintao were its presidents and China’s Vice-President Zeng Qinghong currently holds the position of the school’s president.