How could the communist president of Vietnam, know more about our Prime Minister’s plans than we do?

Why is New Zealand promoting Marxist-Leninist ruled Vietnam for a seat on the UN security council?

Why is the media ignoring the security implications of closer NZ/Vietnam ties?

Could the Vietnamese president have blown the cover off a long-harboured ambition by Helen Clark?

The prime minister has long been dogged by speculation that she has an eye on the top United Nations job – she was even named by Time magazine in 2006 as a potential candidate to take over as secretary-general from Kofi Annan, a role that eventually went to Korea’s Ban Ki Moon. 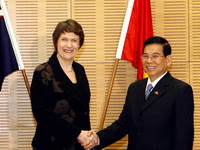 Vietnamese President Nguyen Minh Triet, who is in New Zealand for a three-day trip, set the hares running again yesterday with a cryptic comment at a joint press conference with Miss Clark.

It came after Miss Clark confirmed that New Zealand would support Vietnam’s bid next month for one of 10 contestable seats on the UN’s 15-member Security Council.

Asked why it was doing so, Miss Clark said part of the reason was that in return, New Zealand could in the future hope to rely on votes from Vietnam for election to other international bodies – a practice known as “vote-swapping“.

Mr Triet, through an interpreter, responded; “In return, Vietnam is also ready to support New Zealand in her candidature for other position of the United Nations.”

Miss Clark quickly qualified that by saying that New Zealand was starting its “long-term campaign for re-election to the Security Council again“.