A contributor who is well known to me and a very credible researcher, posted this piece on the late Yasser Arafat on the comments section of this post.

I think it deserves its own posting as it well illustrates that the Marxist/Muslim alliance is no new phenomonon, but is many decades old and has clearly defined aims. 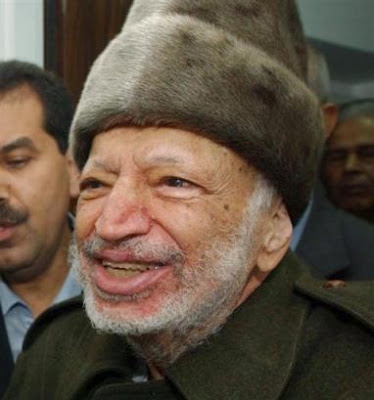 It is often said that the truth is one of the first casualties of war. This is certainly the case with regard to Palestinian Authority chairman, Yasser Arafat.

Arafat once declared Jerusalem his birthplace: “This is my city . this is where I was born.” But he was not born in Jerusalem. Nor, as some of his comrades have claimed, was he born in the Khan Younis refugee camp in Gaza; but in Cairo, Egypt, in 1929.

Arafat presents himself to the world as a victim of Zionism who only took up arms because he lost his home and worldly goods when the Israeli state was created. While it is true that his parents came from Palestine, it is important to note that they were not “refugees” or “exiles.” They had simply moved to Egypt in the mid-1920s, more than two decades before the state of Israel came into being in 1948.

Arafat then lived in Cairo until age 28 and identified as an Egyptian. He first became involved in radical politics in 1951 while a student at Egypt’s Fuad University, working as a student organizer for the Marxist-Leninist Moslem Brotherhood.

One of the goals of the Brotherhood was to infiltrate the Islamic fundamentalist movement, in order to spread among Arabs the Soviet propaganda claim that Israel was an outpost of US imperialism. This would destabilise the Middle East, aid anti-American regimes into power, and build up Soviet influence in the region.

In 1956 Arafat, along with fellow Marxist-Leninists Salah Khalef and Khalil al-Wazir, attended the Soviet-run Prague World Festival of Youth where they formed the nucleus of the terrorist Al Fatah. This radical cell would later become the core of the Palestinian Liberation Organisation (PLO).

Arafat first came to public prominence in the West after the 1967 Arab-Israel war, with the help of the Soviets and their media stooges. He was one of the organisers of a 1972 conference held at the Baddawi refugee camp in Lebanon that established what international terrorism expert

Yossef Bodansky refers to in his book Target America as “an alliance of progressive movements and terrorist organizations.” Besides the PLO, this would include terrorist cells from Europe and the Third World.

This conference institutionalized international left-wing terrorism directed from the Kremlin, intended to undermine Israel and the West and lead to socialist victory.

The makers of the US documentary “The Russian Connection” interviewed several PLO members and were told that in the 1970s, no terrorist attack on Israel would occur without first being cleared with the Soviets.

The PLO itself boasted of Arafat’s regular weekly meetings with Soviet Ambassador Alexander Soldatov. The Soviets, according to the documentary, supported the PLO with arms, training, planning and propaganda.

These planned attacks were not military actions, but the killing of innocent civilians. They continue to this day in the wave of cowardly suicide bombings splashed across newspapers all over the world. The strategy is that Israel can be defeated and destroyed by the terrorist murder of as many Jewish men, women and children as possible.

In his ongoing use of terrorism, Yasser Arafat continues to employ political methods learned from his Soviet masters, displaying a consummate mastery of the Marxist-Leninist tactic of “dialectical materialism.”

For Marxist-Leninists, as Mao Tse-Tung puts it, “There is nothing in this world but matter in motion.” The material world is made up of a thesis (the status quo) and an antithesis (the change agent, or revolutionary). Out of the clash between these two opposites, a new socialist society will one day be born.

Hence, the dialectic is best understood in terms of the analogy of a hammer hammering in a nail. The hammer smashes down onto the nail, driving it further into the wood. At that point the force is expended and no further progress towards the goal is possible. The hammer then draws back and re-gathers its force before smashing down again. Marxist-Leninists therefore view any retreat or concession as merely temporary and tactical.

The Palestinian Arab leadership employs the dialectical tactic of “peace” and/or violence, often offering both at the same time, at strategically advantageous points on the road to its ultimate goal of destroying the Israeli state.

What are the roots of the Arab-Israeli conflict? Within hours of the historic 1948 United Nations decision to create a Jewish state, Israel was attacked without warning by six Arab nations promising to complete Hitler’s work. Despite repeated assurances from Jewish leaders that all non-combatants would remain unmolested, many Palestinian Arabs then fled to refugee camps in Lebanon and the Gaza strip, at that time part of Egypt.

They expected to return to their homes in a few days once the Arabs armies were victorious. But the unthinkable happened. The Jews won. Ever since that time, the Palestinian Arab leaders have kept their people trapped in squalid refugee camps as a political weapon.

This demonstrates Yasser Arafat’s mastery of another Marxist-Leninist political tactic, “The National Question.” Based on the works of Lenin, Marxist-Leninists have for decades encouraged the independence aspirations of indigenous peoples and minority groups to bring about the overthrow of the existing social order, and eventual socialist control.

Arafat’s Soviet instructors soon helped him to see that world opinion could be mobilised behind his cause if the refugees became “Palestinians” rather than Arabs. By becoming “Palestinians,” the Arabs succeeded in turning the Arab-Israeli conflict from a war of annihilation against the Jews into a struggle of dispossessed natives against colonialist invaders.

On all the evidence, Yasser Arafat is no Palestinian nationalist. He is a professional Soviet-trained revolutionary who has hooked into a group of people with a grievance and seamlessly shaped them into a political force in the pursuit of his socialist nightmares.

While the Soviet Union and its Evil Empire has imploded and Moscow is no longer the epicenter for world socialist domination, the political strategies set in motion by the Soviets decades ago continue to find expression in the present-day Arab-Israeli conflict.

The barrier to co-existence between Israelis and Palestinian Arabs, most of whom want peace and economic prosperity, is a Palestinian Arab leadership wedded to Marxist-Leninist ideology and endorsed in its hatred, division and violence by Western intellectuals of the same stripe who are perennial cheerleaders for the destruction of a free society.

1 thought on “Yasser Arafat and the Marxist/Muslim Alliance”