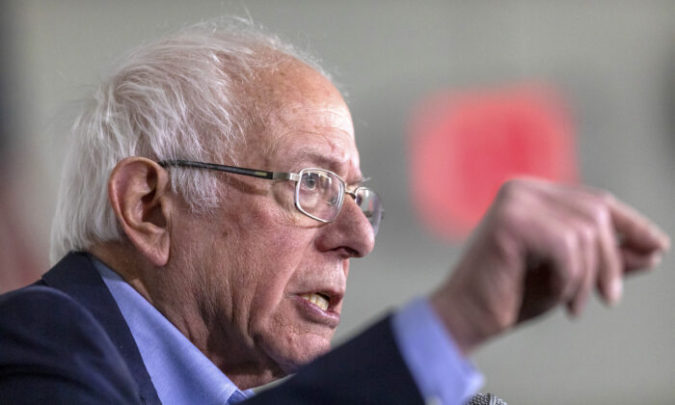 President Donald Trump says that he thinks presidential candidate Bernie Sanders is a communist. Bernie Sanders says he isn’t. The head of the Communist Party USA, Joe Sims, agrees with Sanders. After studying Sanders for more than a decade now, I agree with President Trump.

Bernie Sanders is a creature of Democratic Socialists of America (DSA). They’ve funded and manned his election campaigns. They’ve propagandized for him and supported him for well over 30 years now. Sanders would be nothing without the DSA. And they’re definitely small “c” communists.

But what about big “C” communists. The Communist Party USA, for example?

While the DSA is Sanders’ greatest love, he has also occasionally flirted with the DSA’s best friends in the Communist Party. Aside from a little jealousy, there was no great conflict here. The two organizations have collaborated for decades and share some cross-membership. Their policy positions are almost identical. The DSA’s more innocuous name does, however, make it a little easier to work inside churches, the Democratic Party, and other organizations.

Even as a student in Chicago in the early 1960s, Sanders worked for a time for the Communist Party-controlled United Packinghouse Workers Union.

Sanders’ communist flirtation got a little more serious in the late 1980s.

A notice was placed in the Maoist-leaning newspaper the Guardian (NY) on Nov. 8, 1989, concerning an upcoming U.S. Peace Council 10th anniversary national conference. The U.S. Peace Council was a front for the Communist Party USA and an affiliate of the Soviet-controlled World Peace Council.

Sanders was hobnobbing here with some of the most-dangerous communists on the planet. Little wonder that the FBI was keeping tabs on him when he served as mayor of Burlington.

H.R. 950, the Job Creation and Infrastructure Restoration Act of 1997, was introduced in the 105th Congress on March 5, 1997, by congressman Matthew Martinez of California. It had 33 original co-sponsors, including Sanders.

According to the New York State Communist Party:

In 2010, John Case wrote about his personal experiences with Sanders while serving as a Communist Party district organizer in New England. The article in the Communist Party’s Political Affairs was entitled “Sanders for President?”:

“There are few, if any, politicians on the left, more shrewd than Bernie Sanders. … I got to know him somewhat in my years as a UE rep in Vt, and later as DO for the Communist Party in N. New England. With a few arguable exceptions, he has always — both ideologically and politically — pursued a working-class line.

“As important, he become a demonstrated master of very concrete tactics directed at isolating the right, without appearing irresponsible or reckless to center forces. He kept focused on the concretes — especially economics, and non-corrupt governance — that blunted repeated attempts by the right to isolate him.”

In April 2015, just a weekend away from Election Day in Chicago’s mayoral and city council races, Sen. Sanders came to Chicago to speak in support of Jesus “Chuy” Garcia, the far-left’s candidate against incumbent Mayor Rahm Emmanuel.

In front of a crowd of 700 gathered on Chicago’s far southeast side, Sen. Sanders and district Steelworker retiree leader Scott Marshall fired up the voters for their friend Garcia.

According to a report of the event in the Communist Party’s People’s World:

“U.S. Senator Bernie Sanders elaborated on the theme of building a people’s movement. ‘What we are doing is not just to make the 10th ward better,’ he said, ‘but demonstrating when people stand together there’s nothing we can’t accomplish.’

“Then he laid out what looked to the enthusiastic crowd a lot like a platform for the 2016 presidential race.

“‘We’re gonna ask the richest people — billionaires and corporations — to start paying their fair share,’ he said right off the bat. Next, he spoke of putting millions to work at green and living wage jobs by ‘investing in the crumbling infrastructure’ and creating energy systems that cut carbons. He advocated free tuition in public colleges and universities, Medicare for All, raising Social Security benefits, overturning Citizens United and public funding for elections. …

“‘Change is in the air,’ observed steelworker retiree [Scott] Marshall. ‘A powerful movement, led by labor, is being born.’”

Garcia lost the mayoralty race but was later elected to Congress in 2018, where he proudly serves in the Bernie Sanders’ initiated Congressional Progressive Caucus.

In a Jan. 24, 2018, article on the Communist Party USA website, party leader John Bachtell explained his members’ involvement in the 2016 and 2018 election campaigns:

“Members were involved with Bernie Sanders campaign and are continuing their activism in Our Revolution, Swing Left, Indivisible, Working Families Party, statewide groups like the New Virginia Majority and local Democratic Party groups and 2018 electoral campaigns.”

The Communist Party USA appears to be at least equally involved in Sanders 2020 campaign.

“Defeating Trump and the ultra-right in 2020 means moving the electorate to the left. The most effective force doing that is the Sanders campaign, which we should become fully immersed in.”

Communist Party Chairman Joe Sims may not consider Sanders a communist, but it seems like most of the rest of the party considers him a worthy comrade.

Trevor Loudon is an author, filmmaker, and public speaker from New Zealand. For more than 30 years, he has researched radical left, Marxist, and terrorist movements and their covert influence on mainstream politics. He is the author of a soon-to-be-published book “White House Red: Communist, Socialists, and Security Risks Running for U.S. President, 2020.”