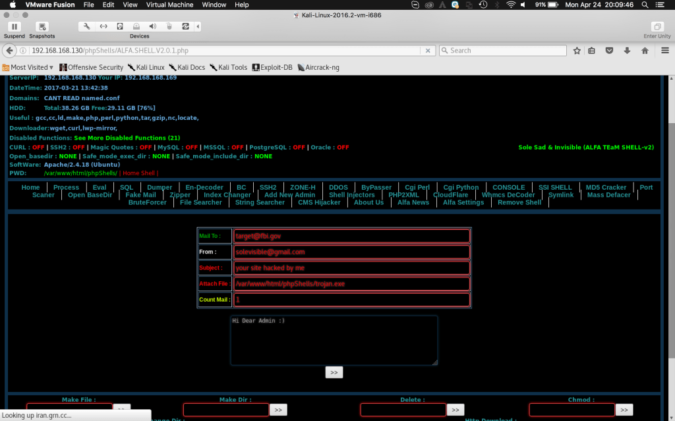 Since the death of several Iranian warlords including Qassim Soleimani, the United States has dispatched more military personnel to the Middle East. The Patriot missile batteries scattered in the region including in Bahrain are now at the ready. When it comes to cyber operations inside Iran, little is being discussed as a means of retribution against the United States. Iran does have cyber warfare capabilities and does use them.

It has been mentioned in recent days that President Trump has been quite measured in responding to Iran’s various attacks including striking Saudi oil fields, hitting oil tankers and shooting down one of the drones operated by the United States. In fact, the United States did respond directly after the downing of our drone by inserting an effective cyber-attack against Iran’s weapons systems by targeting the controls of the missile systems.

Iran has an estimated 100,000 volunteer cyber-trained operatives that have been expanding for the last ten years led by the Basij, a paramilitary network. The cyber unit known for controlling the Iranian missile launchers is Sepehr 110 is a large target of the United States and Israel. Iran also mobilizes cybercriminals and proxy networks including another one known as OilRig.

Due to a more global cyber threat by Iran known to collaborate with North Korea, China, and Russia, NATO has been quite aggressive in cyber defense operations via the Cooperative Cyber Defense Center of Excellence by applying the Locked Shields Program.

Not too be lost in the cyber threat conditions, Iran also uses its cyber team to blast out propaganda using social media platforms. If this sounds quite familiar, it is. The Russian propaganda operations manual is also being used by Iran. The bots and trolls are at work in Europe to keep France, Britain, and Germany connected to the Iranian nuclear deal and to maintain trade operations with Iran including diplomatic operations. There are fake Iranian and Russian accounts still today all over Twitter and Facebook for which Europe is slow to respond if at all.

Meet APT33, which the West calls the Iranian hacking crew(s). The other slang name is Elfin. APT33. It is not only hacking, but it is performing cyber-espionage as well. There are many outside government organizations researching and decoding Iran’s cyber operations that cooperate with U.S. government cyber operations located across the globe that also cooperate with NATO.

Recorded Future is one such non-government pro-active cyber operation working on Iran. These include attributions of cyber attacks by Iran against Saudi Arabia as well as the West by decoding phishing campaigns, relationships, malware and web shells, and security breaches.

Recently published results include in part:

In our previous report, “Iran’s Hacker Hierarchy Exposed,” we concluded that the exposure of one APT33 contractor, the Nasr Institute, by FireEye in 2017, along with our intelligence on the composition and motivations of the Iranian hacker community, pointed to a tiered structure within Iran’s state-sponsored offensive cyber program. We assessed that many Iranian state-sponsored operations were directed by the Iranian Revolutionary Guard Corps (IRGC) or the Ministry of Intelligence and Security (MOIS).

According to a sensitive Insikt Group source who provided information for previous research, these organizations employed a mid-level tier of ideologically aligned task managers responsible for the compartmentalized tasking of over 50 contracting organizations, who conducted activities such as vulnerability research, exploit development, reconnaissance, and the conducting of network intrusions or attacks. Each of these discrete components, in developing an offensive cyber capability, were purposefully assigned to different contracting groups to protect the integrity of overarching operations and to ensure the IRGC and/or MOIS retained control of operations and mitigated the risk from rogue hackers. Read more here in detail from a published summary of 6 months ago.