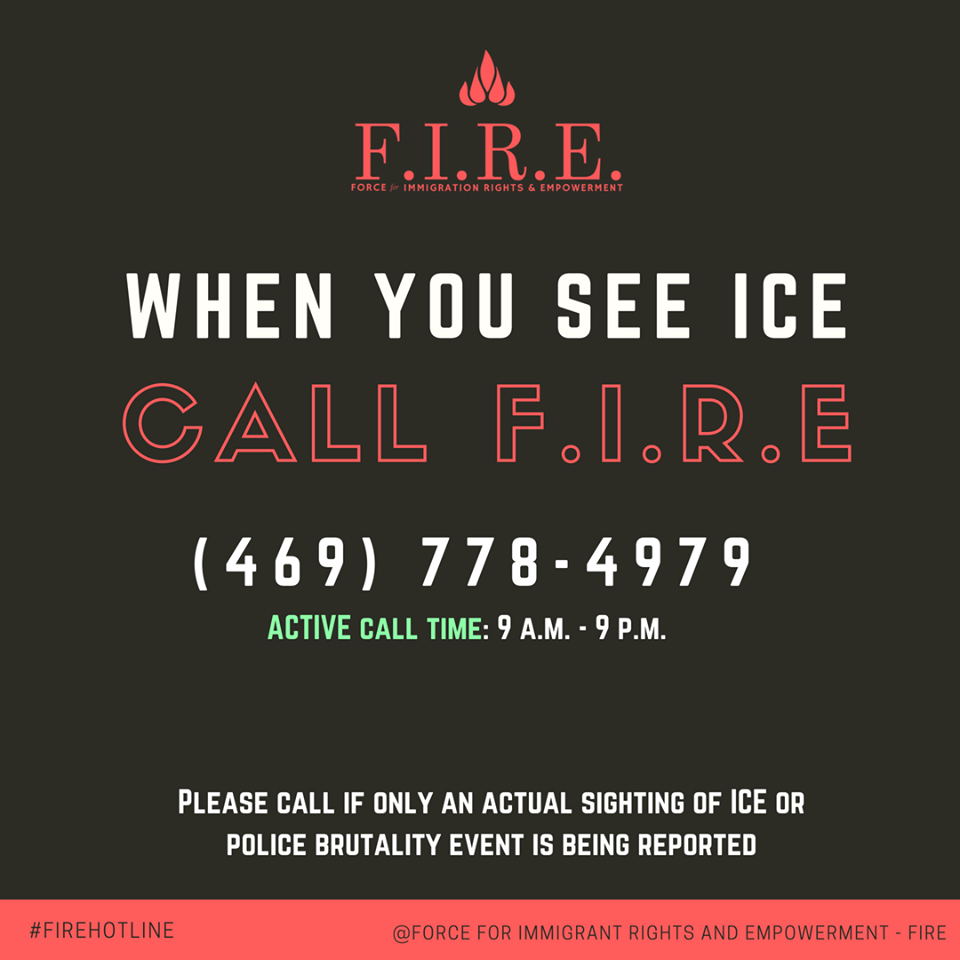 They do training. training on protecting our communities from ICE! Bring a Laptop! FIRE is located in several states and quite active in Texas, Illinois, and California. This organization collaborates with RAICES. ‘Refugee and Immigrant Center for Education and Legal Services.

The training by FIRE just for Texas includes:

More than a dozen local and statewide nonprofits — including Dallas Catholic Charities, RAICES, the North Texas Dream Team and the ACLU of Texas — formed the Force for Immigrant Rights and Empowerment, known as FIRE.

The coalition hosts “Know Your Rights” sessions, where immigrants are taught to distinguish between arrest warrants signed by judges and those signed by ICE officers, which don’t grant ICE officers the legal right to enter someone’s home.

Immigrants also learn how to build an emergency family plan in case a parent is arrested and who to call in events of arrests, among other lessons.

President Trump has authorized aggressive deportations of illegal immigrants which hovers around 1 million cases. These deportations are not raids but rather individual cases where the judge has already ordered deportation. There will be some significant law enforcement confrontations as families are harboring these people. Further, there are thousands of households that include non-citizens as well as citizens that are receiving huge financial benefits from the U.S. Department of Housing and Urban Development. This has been going on since 1980 and those who are 62-years-old or younger can either be evicted or have their benefits terminated if new rules take effect. HUD estimates it would save the taxpayer up to $210 million per year as just in Texas there are 6,000 households that fit this description. This new policy has not rolled out yet but is slated to occur by the end of the year. See more details here from the Federal Register.

As for the million or more slated to be deported by ICE, it must be noted:

1. ICE suggests voluntary departure. This allows the deportee to leave the U.S. at their own expense and within a schedule. If ICE has to perform the deportation, any re-entry is a felony.

2. If hearings in a court or on appeals and there is a ‘no-show’, this is an automatic order of removal. Bail is non-refundable.

3. Once a judge orders deportation, ICE will arrange for travel documents and transportation, so the deportee has time to get affairs in order under the letter of ‘bag and baggage’.(Form I-166)  This letter tells the deportee where and when to report for removal and how much baggage is allowed.

4. If the deportee cannot travel within the time limit due to extenuating circumstances including illness, they are required to file an application for a ‘stay’ until such time the circumstances clear.

5. If the ‘bag and baggage’ letter is ignored, then the full case is referred to the fugitive unit. Any of these arrests can take place at any time, under any condition or any location.

ICE has a database of criminal illegal fugitives and the crimes range from murder and rape to weapons trafficking, narcotics, and underage pornography. Those cases slated for immediate and aggressive deportation which is reported in the million case range are the worst of the worst. The media won’t tell you that and actually, the immigrant groups noted above won’t either.

The international operation resulted in a total of 25 arrests and 53 search warrants executed in three countries. Over the course of the operation, law enforcement seized 5,300 firearms and components, 167 explosives/ordinances and 15 silencers from the transnational criminal organization (TCO).

HSI Miami initiated the investigation into the TCO smuggling large quantities of weapons parts and accessories from the U.S. to Argentina and Brazil. The TCO exploited the U.S. Postal Service by illegally exporting weapon parts and ammunition regulated by the International Trafficking in Arms Regulations without the proper State Department licenses. Since the inception of this investigation, several HSI offices, as well as Argentinian and Brazilian authorities have conducted multiple search warrants and arrests netting significant quantities of firearms, firearms parts and more than $100,000 in cash.

Does anyone care about the victims of crimes committed by illegals? Well, ICE has a page for that. Go here to see just a few of the most wanted.