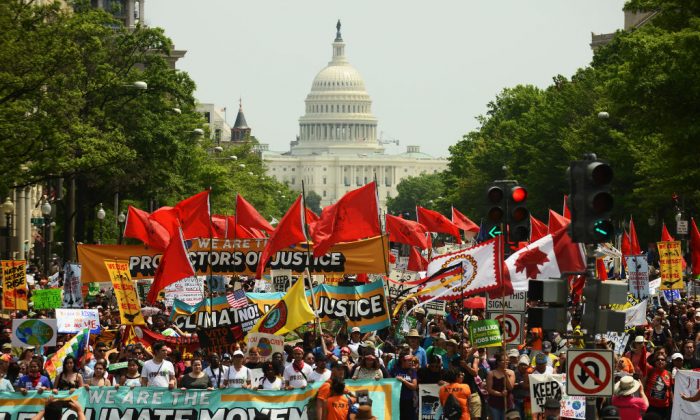 By: Trevor Loudon | The Epoch Times

In the 1970s, a friend of mine, “Mike,” was an avid striped bass fisherman on the New Hampshire coast. He was drawn into a local environmental group, the Clamshell Alliance, after being told that warm water from local nuclear power plants would harm the striped bass fishery.

Mike was trained to sneak into the local power plant to spray-paint environmental slogans on the walls. There were whisperings that some more-seasoned activists might be preparing to commit more serious acts of sabotage.

At a Clamshell meeting one night, Mike raised an awkward question about the environmental value of a proposed tactic. He was pulled aside by a group leader to be set straight. “Don’t you understand?” said the leader. “Understand what?” said Mike.

“We don’t give a [expletive] about the environment. We’re here to bring down American capitalism,” the leader replied.

Locke made little comment about the disastrous Chernobyl meltdown a decade later that blanketed much of the former Soviet Union and Eastern Europe in nuclear radiation.

Locke, who was raised by Stalinist parents, would also support Pol Pot’s conquest of Cambodia in 1978, and the brutal Soviet invasion of Afghanistan the following year. This didn’t prevent him from serving several terms in the New Zealand Parliament for the Green Party. Locke’s Green Party parliamentary colleagues included Sue Bradford, formerly of the pro-China Workers Communist League, and Russel Norman, who started in politics in Australia with the pro-Cuba Socialist Workers Party and now heads Greenpeace New Zealand.

Across the Tasman Sea, in Australia, the situation is similar.

Her co-panelists were Dulce Maria Pereira (Workers Party of Brazil), Luciana Castellina (a member of the European Parliament and directorate member of the Italian Party of Communist Refoundation), and Christabel Chamarette, (Australian Greens senator from Western Australia).

Australian Greens Sen. Lee Rhiannon was raised in a Stalinist family and joined the pro-Soviet Socialist Party of Australia (SPA) at its founding conference, which followed its split from the Communist Party of Australia (CPA). She served on the SPA central committee’s youth subcommittee and developed close relations with Soviet, Czechoslovakian, and East German communist youth groups. In 1977, Rhiannon led a SPA delegation to Moscow at the invitation of Soviet leader Leonid Brezhnev’s hardline regime.

At an October 2000 seminar commemorating the CPA’s founding, Rhiannon reportedly “argued that a broad-based left movement is being built already” and that the “Greens is closest to the best of the CPA’s politics and methods.” In May 2010, she addressed the Australian Left Renewal Conference, “lamenting her job in keeping the Greens on a left-wing trajectory.

“The challenge to keep the Greens Left is huge and I’m convinced social movements are the key to that. This is the way to keep the pressure on left parliamentarians so that they work to advance the social objectives of our movement, not just their party’s political interests,” she stated, according to Australian magazine The Monthly.

The CPA collapsed in 1994 in order to set up the Sydney-based SEARCH Foundation, which, in turn, has close ties to the Australian Greens.

The Green movement has, at times, been accused of acting as an agent of “economic warfare” for foreign powers.

In June 2018, Republican leaders of the U.S. House Natural Resources Committee launched a probe into what they described as potential “undue influence” by the government of China over a leading U.S.-based environmental group.

Their target, the 1.3-million-member Natural Resources Defense Council (NRDC), has sued the Trump administration repeatedly over its efforts to roll back harmful environmental regulations and has worked in China for many years to “promote clean energy and a retreat from reliance on fossil fuels.”

Rep. Rob Bishop (R-UT), the committee chairman, and Rep. Bruce Westerman (R-AR), chairman of its oversight and investigations subcommittee, requested that the NRDC turn over documentation of any payments it has received from Chinese officials. They also asked for documentation of NRDC’s registration as a “foreign agent,” or an “explanation of why the environmental group should not be registered as required by law for those who lobby on behalf of a foreign government.”

In their letter, the congressmen wrote: “The Committee is concerned about the NRDC’s role in aiding China’s perception management efforts with respect to pollution control and its international standing on environmental issues in ways that may be detrimental to the United States. … The NRDC’s relationship with China has many of the criteria identified by U.S. intelligence agencies and law enforcement as putting an entity at risk of being influenced or coerced by foreign interests.”

NDRC president Rhea Suh had visited China in 2016 and stated: “What I saw on my trip … was a reminder that China is doing a lot to address its problems at home and to help fight climate change—starting with the wind turbines I saw from my train window as I traveled from Shanghai to Beijing.

“China still accounts for 27 percent of the global carbon footprint. Add to the that U.S. share—another 15.5 percent—and the two countries together produce about 43 percent of all global carbon pollution.

“That’s why fixing this problem starts with our countries, the United States and China. And it’s one more reason I’m so proud of the work NRDC has done in China since first starting our clean energy efforts there 20 years ago.”

Suh was President Barack Obama’s assistant secretary for policy management and budget in the Department of the Interior. She is also a 2007 graduate of the Oakland, California-based Rockwood Leadership Institute, a school for radical “community organizers” that is closely affiliated with the pro-China communist group Freedom Road Socialist Organization (FRSO).

Rockwood has graduated hundreds of environmental activists, including the leadership of most major U.S. “green” organizations. Among them are Collin O’Mara, president and chief executive officer of the National Wildlife Federation; Peggy Clark, managing director of Aspen Global Health and Development at The Aspen Institute; and Michael Brune, executive director of the Sierra Club.

Almost all U.S. environmental leaders can be connected to Marxist groups of one stripe or another.

If pro-China environmental groups can weaken the U.S. economy with over-regulation and the elimination of cheap fossil fuels, China will soon have an economic (and military) advantage over its No. 1 competitor: the United States.

Vladimir Putin’s Russia is playing a similar game in using “environmental” groups to shut down “fracking” in Europe and the United States. Fracking is a drilling technology that has unleashed huge amounts of underground oil and natural gas that conventional drilling couldn’t reach. Russia wants to stop fracking to keep Eastern Europe dependent on Russian energy and to weaken the U.S. economy and its military preparedness.

According to Jacob Grandstaff of the Capital Research Center, “Russia has successfully stopped fracking efforts in Eastern Europe through phony environmentalist and media campaigns, and is now attempting to disrupt the surge in American natural gas production that is quickly bringing the U.S. into energy independence, and creating threatening unwanted competition for the Russian energy in Europe.”

Intelligence services have discovered that Russia is heavily invested in anti-fracking campaigns in Europe and North America. According to the National Review, “In 2015 alone, the intelligence community found that RT, Russia’s state-run media outlet, produced over 60 anti-fracking stories.”

In July 2017, Republican Reps. Lamar Smith and Randy Weber, both of Texas, wrote a letter to U.S. Treasury Secretary Steve Mnuchin demanding that he investigate the company Klein Ltd., which was reportedly funneling millions of dollars to the Sea Change Foundation—a 501(c)(3) organization—which passes money along to anti-fracking campaigns organized by the Sierra Club and similar groups.

“This scheme may violate federal law and certainly distorts the U.S. energy market,” Smith said, according to the Capital Research Center.

So far, backed by 45 Democratic Representatives, GND goals include halving the U.S. military budget and the complete elimination of fossil fuels by 2030.

“The Select Committee’s detailed national plan would also have the goal ‘to promote economic and environmental justice and equality.’ The draft specifically mentions spending $1 trillion over 10 years, in addition to extensive taxes and regulations to steer the economy and society as the 15 committee members see fit,” Robert P. Murphy, a senior fellow at the Mises Institute, wrote.

“Steering the economy” by committee and “economic and environmental justice and equality” are socialism by another name. It’s also a recipe for a complete economic meltdown. Wouldn’t Russia and China relish that prospect?

The GND is being heavily promoted by all of the country’s major “green” groups, with the Democratic Socialists of America (DSA) and the pro-China Communist Party USA (CPUSA) motto “People and nature before profits.”

The concept itself came out of the Sunrise Movement, which, in turn, arose out the Student Power Network, and similar fronts for DSA and the pro-China FRSO.

While there are a few legitimate environmental organizations out there, the bulk are more interested in destroying Western “capitalism” than in preserving our natural world.

The Green movement is really a “red” movement. Our environment can best be preserved and enhanced by better protection of property rights in a free-market economy. Private individuals—not socialist governments—are the best stewards of the environment. China and the old Soviet bloc proved that point once and for all.

TREVOR LOUDON IS AN AUTHOR, FILMMAKER, AND PUBLIC SPEAKER FROM NEW ZEALAND. FOR MORE THAN 30 YEARS, HE HAS RESEARCHED RADICAL LEFT, MARXIST, AND TERRORIST MOVEMENTS AND THEIR COVERT INFLUENCE ON MAINSTREAM POLITICS.