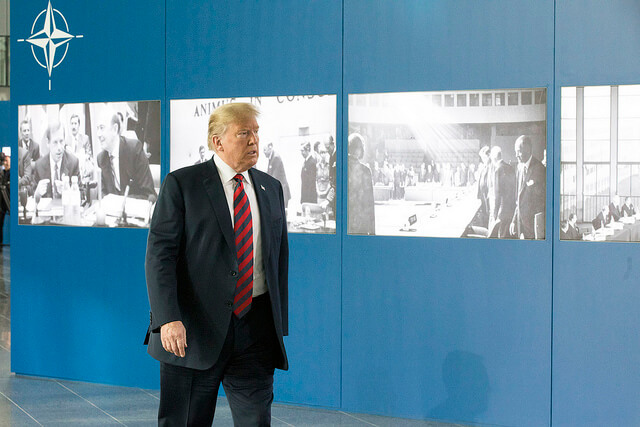 In what has been called a “strong message” to President Trump, the new socialist-controlled House of Representatives has passed the “NATO Support Act” (H.R. 676) by a vote of 357 to 22.  So while the House under the direction of Speaker Nancy Pelosi has resisted paying for a wall to defend the sovereignty of the United States, the House has voted overwhelmingly to defend the borders of countries in Europe.

The NATO Support Act is described as one of the first bills pushed through the new Democratic-majority House. This demonstrates their priorities: open borders for the U.S. and secure borders for the rest of the world, to be guaranteed by American fighting men and women.

Incredibly, many Republicans, including House Republican Leader Kevin McCarthy, went along with the ploy. The bill prohibits withdrawal from NATO and even endorses “robust United States funding for the European Deterrence Initiative,” a plan for even more spending by the U.S. on our European “allies.”  One can easily see this developing into American support for a European Army or even a United Nations Army.

But the U.S. can’t protect its own southern border.

Trump’s position has been that NATO members should pay their fair share, a minimum of two percent of their GDP on defense by 2024. This stance has made him, in the view of House Democrats and some Republicans, a Russian agent. What it really means is that deadbeat nations do not think enough of themselves or their people to safeguard their own sovereignty. Trump is simply recognizing this fact, and trying to shock them into recognizing reality. Only through self-reliance can these countries ever hope to stand up to Russia.

Only 22 members of the House voted against this misguided bill that commits American blood to defend the borders of other countries.

Republican Rep. Russ Fulcher told the Idaho Statesman that he voted “no” because it “empowers foreign leaders too much authority by locking the United States into the current terms of NATO.” He added, “More than 20 countries currently don’t pay their dues; in so doing increasing obligations to the U.S. If we remove our own ability to make any changes to our position in the future, we also remove any leverage we could have to hold other nations accountable to pull their own weight.”

Another dissenter, Rep. Tom McClintock, noted, “This act prohibits U.S. withdrawal from NATO and commits perpetual American support.  While I support NATO and our continued presence in it, this bill is unnecessary and appears deliberately aimed at undercutting the President’s efforts to get NATO countries to pay their fair share for its support.  NATO was formed to provide security against the now-defunct Soviet Union; not to relieve individual European nations from their responsibility to maintain their own defenses at America’s expense.”

Rep. Scott Perry objected to the bill for many reasons, including that the proposal was clearly unconstitutional by violating the “separation of powers” through Congressional interference with legitimate presidential authority. He explained, “The Executive Branch is responsible for international relations and treaties. The Constitution is very clear. The bill attempted to supersede the Constitution and case law; only the president has the Constitutional authority to negotiate treaties.”

What Trump has been saying about the NATO deadbeats is entirely factual. He has questioned the value of NATO when only five of its 29 members actually pay their way.

In an article headlined, “Trump is right about the NATO deadbeats,” Yahoo Finance reported last July that, “In 2014, NATO agreed that each member country should spend a minimum of 2% of GDP on defense within a decade. So far, only five countries (of NATO’s 29 members) meet that threshold: the United States, the United Kingdom, Greece, Estonia and Latvia.” Of course, NATO continues to insist that its members will eventually meet the target.

There was a time when NATO was perceived as an anti-Soviet alliance. But that completely changed under President Clinton, who illegally transformed NATO into an offensive military force without submitting a new NATO Treaty to the Senate for ratification.   NATO’s new “Strategic Concept” involved operating outside the borders of NATO member-states and undermined the so-called “principle of collective defense” under Article 5 of the North Atlantic Treaty.

All of this brings up the most protected man in the media today, globalist George Soros, who wrote Toward a New World Order: The Future of NATO, back in 1993. He figured that NATO could take on the military responsibilities of the New World Order until the U.N. was ready to do the job.

Giving NATO a blank check has real consequences.  As a result of expanding NATO to 29 countries in 2017, American troops are now obligated to defend tiny Montenegro, the newest NATO member and a so-called “critical addition” to the Transatlantic alliance, without Congress first passing a declaration of war. For questioning why Americans should die for Montenegro, Trump was accused by the late Senator John McCain of “playing right into Putin’s hands.”

The NATO war on Yugoslavia launched by President Clinton benefitted a Muslim terrorist group, the Kosovo Liberation Army (KLA), with links to Osama bin Laden, who had declared war on America in 1996, bombed our embassies in Africa in 1998, and would later, of course, orchestrate 9/11. It was a NATO war which only benefited the Muslim terrorists in the KLA, further destabilizing the region. Clinton could have been impeached for taking the country to war under false pretenses and without congressional approval. Indeed, his intervention in Kosovo was rejected by Congress, and Clinton proceeded with the war anyway. He waged it through the use of executive orders and presidential power. Under this self-designated authority, Clinton delegated command-and-control of U.S. forces to NATO and its then-Secretary-General Javier Solana, who decided when the air war would be discontinued and had the authority to order U.S. troops into military action once again. (Solana also served as European Union high representative for common foreign and security policy and secretary-general of the Council of the European Union.)

As part of this process, Clinton deployed U.S. forces to Macedonia as part of a United Nations force, prompting one patriotic U.S. soldier, Michael New, to declare he signed up for the “Green Team,” the Army, not the “Blue Team” of the U.N., and he resisted.  His father Daniel New and I wrote a book, Michael New: Mercenary or American Soldier, about how he was court-martialed and given a bad conduct discharge for refusing the illegal and unconstitutional orders.

Despite a solid record against the United Nations, we are still waiting on the White House to grant a presidential pardon of Michael New. This is something Trump can easily do that cannot be reviewed by the courts. It’s a way that the president can reassert the value of a pro-American foreign policy. He could also threaten to veto the NATO Support Act.

Before the deadline of February 15 arrives regarding negotiations on border security, Trump could explain to the American people that Congress is now in the strange position of promising that American soldiers should die to protect foreign borders while it fails to authorize a Border Wall to protect our own people. In effect, the U.S. Armed Forces have become a Border Wall for foreign countries that will be reinforced by the spilling of American blood. It is not promoting Russian interests to question this insanity. It is good old-fashioned American patriotism.

1 thought on “Congress Votes for Secure Borders for NATO Countries”