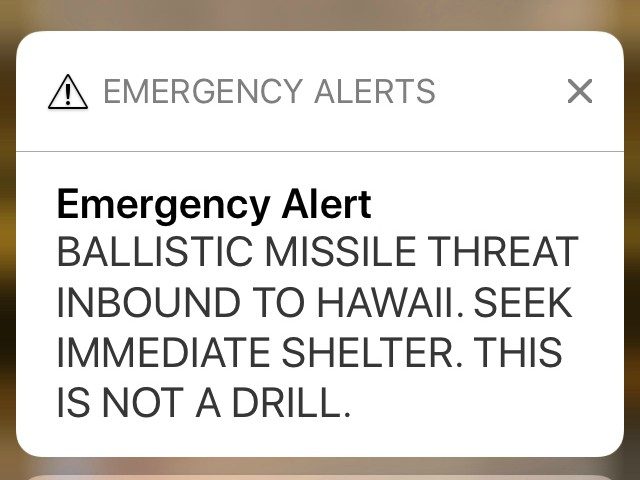 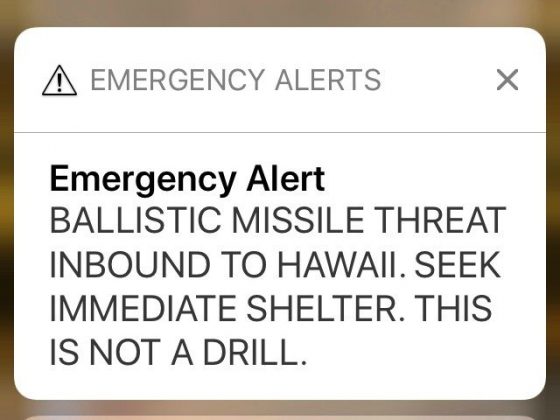 The citizens of Hawaii are having an interesting day today. And not by choice. Across Hawaii, residents got an ominous message on their phones’ Emergency Alert System (EAS) telling them to “seek immediate shelter” from a “ballistic missile threat.” 38 minutes of sheer terror ensued where people dove for cover. The ones that heard about it that is. The EMS system that sends text messages to all cell phones, apparently including those there on vacation, didn’t get the message to everyone. Looks like that system needs a bit more testing. A cynical person might wonder if it was on purpose. I’ve heard them blaming a person pressing the wrong button on this. That’s bull crap and it’s not the way it works. Try again fellas.

Earlier Saturday, Hawaiian citizens reported receiving an emergency alert on their phone that stated: “BALLISTIC MISSILE THREAT INBOUND TO HAWAII. SEEK IMMEDIATE SHELTER. THIS IS NOT A DRILL.” House Rep. Tulsi Gabbard, D-HI, tweeted in regard to the alert: “HAWAII – THIS IS A FALSE ALARM. THERE IS NO INCOMING MISSILE TO HAWAII. I HAVE CONFIRMED WITH OFFICIALS THERE IS NO INCOMING MISSILE.”

Greg Gutfeld, of Fox News’ “The Five” and “The Greg Gutfeld Show,” tweeted that his wife was at a hotel in Hawaii and called the situation “total hysteria/chaos.” He added that families who were evacuating were told to “seek shelter. crying. panic.” “Today’s alert was a false alarm,” Senator Mazie Hirono wrote. “At a time of heightened tensions, we need to make sure all information released to the community is accurate. We need to get to the bottom of what happened and make sure it never happens again.”

Multiple officials and government agencies quickly confirmed the message was a false alarm and the groveling and apologizing began. Meanwhile, it’s been non-stop on the news for hours. White House Deputy Press Secretary Lindsay Walters later implied the false warning stemmed from a state, rather than a federal, mishap. “The President has been briefed on the state of Hawaii’s emergency management exercise. This was purely a state exercise,” he said in a statement. That, I could believe.

According to the Associated Press (AP), Hawaii Emergency Management Agency spokesman Richard Repoza confirmed a false alarm. Boy, I bet this just made the whole North Korea threat very real to the citizens of Hawaii. “Hawaii Emergency Management Agency spokesman Richard Repoza said it was a false alarm and the agency is trying to determine what happened,” the AP reports. I think they probably already know what happened. Either it was a mistake or they were hacked. Either way this is FUBAR. When I heard it, I wondered what the fresh hell was going on and who ordered an apocalypse for today.

The message, initially thought authentic, spread quickly on social media, prompting some panic, as Fox News reported Rep. Tulsi Gabbard (D-HI) estimated over one million Hawaiians received the erroneous alert. The EAS protocol should only be available to government officials. You can bet people were kissing their collective asses goodbye before they found out, oopsie! False alarm! Hawaii is closest to North Korea and the threat of a nuclear tipped ballistic missile hitting them is very real. As I said before, 38 minutes passed before a follow-up EAS message was sent out retracting the warning. Which coincidentally, is the amount of time it would take for a missile to get from North Korea to Hawaii. Fun, huh?

U.S. Pacific Command has detected no ballistic missile threat to #Hawaii. Earlier message was sent in error and was a false alarm. pic.twitter.com/Lvg17VNjiF

In August, Business Insider quoted David Wright, a physicist with the anti-nuclear weapons group Union of Concerned Scientists, as estimating the total missile flight time at 37 minutes. Some early warning systems can sometimes detect pre-launch conditions, like rising heat at missile silos indicating the missile is being fueled, that can give longer warnings. I find this whole thing suspicious, but make no mistake… the threat of North Korea firing a missile at Hawaii is very real.

In November, the Hawaiian government reactivated cold war era missile warning sirens over concerns about North Korean threats. That move followed months of efforts by Hawaiian officials to develop contingency plans for dealing with a North Korean attack. Some of that planning apparently included “a public information campaign.” There’s no way to know if today’s mishap was part of those preparations. And I wonder whose head is going to roll over this.

UPDATE: A NORAD official is saying that the alerts may have been the result of an attack by hackers.

NORAD official tells Denver7 there is "absolutely nothing going on," says this is "possibly a hack" or a "very sick joke." https://t.co/Cn7UOg7luy https://t.co/bMQNBWvWmw via @DenverChannel

.@TulsiGabbard: "Cell phones all across the state – over a million people in my home state of Hawaii – got this alert." https://t.co/qJu9Jmyz66 pic.twitter.com/OiGXUH3ZlM

NO missile threat to Hawaii.

this missile thing – wife at hotel said total hysteria/chaos. families evacuating told to seek a shelter. crying. panic. if it's an accident, or NOT – we cannot play this down. even a prankster should be put away for years.

There is no missile threat. It was a false alarm based on a human error. There is nothing more important to Hawai‘i than professionalizing and fool-proofing this process.

AGAIN FALSE ALARM. What happened today is totally inexcusable. The whole state was terrified. There needs to be tough and quick accountability and a fixed process.

Today’s alert was a false alarm. At a time of heightened tensions, we need to make sure all information released to the community is accurate. We need to get to the bottom of what happened and make sure it never happens again.