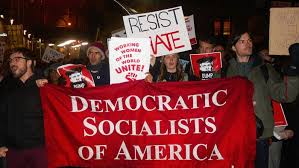 A year ago Democratic Socialists of America, this country’s largest Marxist Organization, had 6,500 members.

On April 5, thanks to the Bernie Sanders campaign and the Trump presidency, DSA  reached 20,000 dues-paying comrades.

A good chunk of this membership is also active in the Democrat Party.

They are also organizing down-ballot campaigns across the country, in a serious effort to move grass roots politics to the far left. While the world is rightly focused on Syria right now, America needs to understand that domestic enemies are also a grave threat to the U.S. Constitution.