The Independent Sentinel: How do you beat Hillary – lied her butt off Thursday and did it so well! 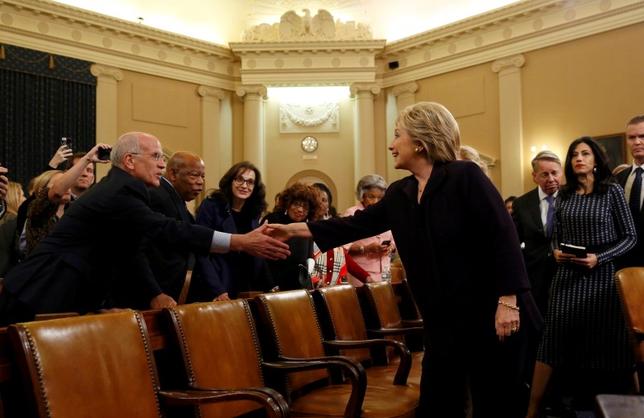 The Democrats On The Benghazi Committee!

Nice Deb: I’m going to nominate the Democrats on the Benghazi committee because they were so eager to circle the wagons around the obviously corrupt and dishonest Hillary Clinton.. What makes them especially repulsive weasels is their gross (yet routine) left-wing projection – accusing the GOP of politicizing the Benghazi investigation as they themselves very blatantly politicize the proceedings.

It’s hard to choose one of the committee Democrats over the others because they are all equally disgusting.

Puma By Design: My nomination for this week’s extra grimy character goes to Hollywood actor/director, Quentin Tarantino, who along with the Black Lives Matter movement celebrated the death of NYPD Officer, Randolph Holder under the guise of an anti-police rally this past weekend in Manhattan.

Officer Holder was shot in the forehead and killed on a pedestrian walkway along the East River/FDR Drive in Manhattan six days ago during a foot pursuit that resulted in the exchange of gunfire between law enforcement and a career thug/known gang member, age 30, with 28 arrests under his belt dating back to the age of 13.

Obviously, for cop haters such as Black Lives Matter, Quentin Tarantino, Marxist trust fund babies among others who celebrate the death of a law enforcement officer, October is a red banner month.

Tarantino old enough to know better and revisiting the glory days of the 1960’s fired up the crowd at the festivities celebrations correction protests on Saturday in Washington Square Park, which called for an uprising against “police terror.”

Tarantino lead the barrage of verbal assaults on police labeling them “murderers.”

The useful idiots aka protesters many of whom I suspect were reliving their glory days as well from squatting in Zuccotti Park, stinking up downtown Manhattan, protesting capitalism and destroying small business a few years back (yeah them) hung on to every word.

Under the Black Lives Matter meme, the protesters mostly Caucasian Marxist trust fund babies unleashed waves of verbal assaults and threats against NYPD officers while displaying signs that read: “Rise Up! Stop Police Terror!” and “Murder with a badge is still murder.”

Tarantino who has made millions on the glorification of drugs, crime and other illegal activities acknowledged the “unfortunate timing” of the celebration, correction anti-cop protest stating, “It’s like this: It’s unfortunate timing, but we’ve flown in all these families to go and tell their stories . . . That cop that was killed, that’s a tragedy, too.”

“Flown in all these families” and countless others?

OF COURSE, as with the Occupy Wall Street squatters in Zuccotti Park that wrecked our City, the protesters were not even New Yorkers. (ASTROTURF brought in with the blessing of Bill de Blasio, Al Sharpton and the community organizer in the White House.)

Not only did Tarantino, Cornel West, Marxist trust fund babies and their comrades, Black Lives Matter activists disrespect our law enforcement, they disrespected the City of New York (again) and the family of Officer Holder struggling to come to grips with the loss of a loved one killed in service just days earlier.

NYC’s police union, the Patrolmen’s Benevolent Association, is now calling for a boycott of all things Quentin Tarantino.

It’s a weekly magazine of some of the best stuff written in the blogosphere, and you won’t want to miss it… or any of the other fantabulous Watcher’s Council content.

It IS A Cognitive Problem, WH Staff Actions Prove It
2022-06-24  0 Comments
By: Denise Simon | Founders Code It is yet another historical cover-up by the Left. Frankly, it is terrifying on many...

DOJ Garland Envoy In Ukraine, A Possible CoverUp Happening?
2022-06-22  1 Comment
By: Denise Simon | Founders Code Umm…Interesting timing… understand the size and bona fides of this envoy and why would Attorney...

Benny Thompson/Liz Cheney Call Holding On Line 3
2022-06-18  0 Comments
By: Denise Simon | Founders Code Actually, there are a few additional details that have surfaced. They include: A group had...