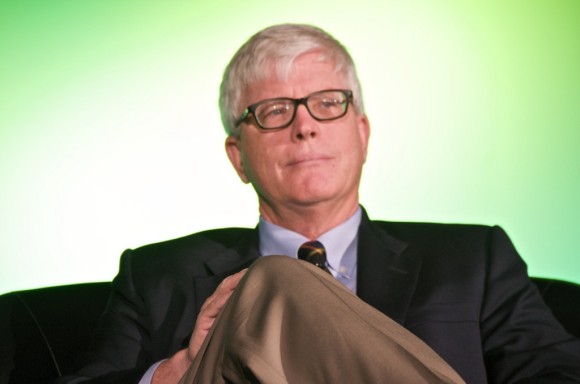 Salem radio commentator Hugh Hewitt has become a media darling for his “expert” opinions, as he lectures Republicans on how to handle not only the media but the issues. However, Hewitt is the same commentator who had flatly predicted a big Mitt Romney win. On October 22, 2012, Hewitt announced, “Romney’s momentum will continue unbroken, and his demeanor and especially his poise will be the takeaway for any undecideds that are left…Romney won the debates decisively, which means he will win on November 6. Some things are simple, and this is one of them.”

Hewitt, known as Hugh Blewit, failed to understand that President Obama had organized “the strongest grassroots organization in the history of American presidential politics,” in the words of Jeremy Bird, the National Field Director of Obama for America. This was a network comprised of more than two million volunteers, backed by neighborhood political teams and 2,700 field organizers. They carried the day.

We noted at the time that Republican strategist Karl Rove was raising $300 million for television ads depicting Republican candidate Mitt Romney as a would-be efficient manager of the U.S economy. Rove had advised Republicans not to call Obama a socialist, believing that undecided, moderate or left-leaning voters would jump to Obama’s side if that charge were leveled against him. This was a terrible miscalculation. It meant that a significant percentage of conservative voters didn’t think Romney was up to the task of identifying and rolling back Obama-style Marxism. They didn’t turn out for Romney. They also gave up on the Republican establishment, a continuing wave of outrage and discontent that accounts for outsiders moving to the top of the field of Republicans contending for the GOP 2016 presidential nomination.

But the establishment is back, in the form of such personalities as Karl Rove, a Fox News contributor, and Hugh Hewitt.

A moderator during the recent Republican debate broadcast by CNN, Hewitt engaged in back-and-forth with candidate Donald Trump over a Trump interview on Hewitt’s Salem network radio show. Trump complained that Hewitt was playing gotcha with trick questions about Arab personalities and names in the Middle East. Hewitt has made it clear he doesn’t like Trump’s style and approach.

Now that candidate Ben Carson is under fire by the media for offering his opinion that a Muslim who believes in Sharia should not be president, Hewitt has gone back on CNN to take issue with Carson and offer his advice. On Tuesday he told CNN’s Carol Costello that Carson is a rookie who has to work on getting his message right.

Confirming his role as a gatekeeper, Jim Geraghty of National Review says that Republican candidates are “attempting to showcase their interest in Hewitt’s priorities.” Similarly, Politico says Hewitt “has captured the ears of the GOP and earned the trust of virtually all of its biggest names.” But why? As proven by his faulty prediction in 2012, it seems he is too tied up in the establishment Republican Party view to understand the progressive wave that is not only still strong in the U.S., but around the world. Despite how things may look on the Democratic side right now, these forces are strong and believe that history is on their side.

In terms of their most recent gains, consider that the socialists have solidified their control of Greece, anti-American socialist Jeremy Corbyn has been elected the head of the Labor Party in Britain, and socialists seem poised to win the Canadian national elections on October 19. Even if the New Democratic Party (NDP) doesn’t win nationally, the left-wing party has already taken control of Alberta, the oil-rich and most conservative part of the country.

Here, avowed socialist Bernie Sanders (I-VT) is strongly challenging Hillary Clinton for the 2016 Democratic presidential nomination. He draws huge crowds—most of them young people—and attracts people in the New Age movement who believe in bizarre things like a federal Department of Peace. This may sound strange, but the movement has tens of millions of followers who forecast a new Aquarian Age, apparently to be led by Sanders and the leader of a new global religion.

Having misjudged one presidential contest, it would be nice if the public were reminded of the details surrounding Hewitt’s prediction of a Romney victory in 2012. His blog at the time had proclaimed, “Why Romney Wins: the Economy is Tanking.” It is easier to pontificate than actually examine what is happening out in the country, as I recently did when covering a Sanders for President rally. The surge for socialism is real and has taken hold among those being “educated” at our public universities. No wonder Sanders wants to give them free college, a maneuver that could guarantee the Democrats millions of votes.

In a 2012 column entitled “Mittmentum Builds,” Hewitt seemed to have New Age powers of clairvoyance, saying that “He who surges last surges best in a presidential campaign, and it appears that Romney has indeed caught the last big wave.” He said that an “amazing” Romney speech in Wisconsin “is the sort of performance that flows from a candidate who knows he is winning.”

Let’s remember that Republican Mitt Romney lost an easily winnable election. He got only 48 percent of the vote, just two points more than Senator John McCain’s (R-AZ) total in 2008.

Candidates get scorched for making perceived mistakes, in response to trick or gotcha questions, but commentators are rarely held accountable for their errors. Let’s take a look back at some other predictions from the 2012 election, as reflected in headlines or actual quotations:

Commentators get things wrong, and that doesn’t disqualify them from continuing to hold their jobs and make predictions. But getting a presidential contest wrong, without analyzing why it happened and whether the progressives are still outsmarting the Republicans, is a recipe for another disaster.

The headline over that October 22, 2012 Hugh Hewitt column was, “Romney Wins Again, And Left Gets It Wrong—Again.” The left was not only “right,” but is as strong as ever. Today, they have the pope on their side.

1 thought on “How “Mittmentum” Backfired On Hugh Hewitt”