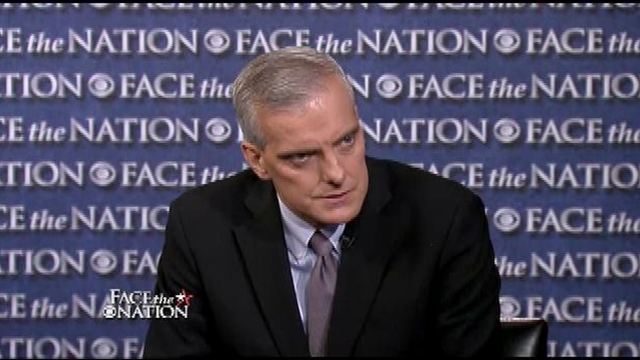 The Noisy Room: My nomination for Weasel of the Week is White House Chief of Staff Denis McDonough for slipping and releasing the name of the American woman hostage that ISIS has in their clutches currently. He was on ABC when he did the oopsie. He was pontificating about how we are fighting ISIS halfway
around the world, which was hilarious. Then he went on to speak about our friendship and support of Japan, which also brought on the giggles.

But when asked about the American hostage and the hostage crisis in general, he opened mouth and inserted both feet – not funny at all:

“And as it relates to our hostages, we are obviously continuing to work those matters very, very aggressively. We are sparing no expense, and sparing no effort, both in trying to make sure that we know where they are and make sure that we’re prepared to do anything we must to try to get them home. But [REDACTED] family knows how strongly the president feels about this. And we will continue to work this.”

The name of the American woman being held by ISIS was previously unnamed.

The name has now been withdrawn because of security concerns by the family. But the damage was done. For going above and beyond uncaring… he gets my nomination this week. I strongly suspect the dropping of the name was intentional.

Legend In His Own Mind And Rotund Radical Rabble Rouser Michael Moore!!

Nice Deb: Well, I thought Michael Moore dodged the weasel bullet, last week, after we allowed him to get away with several obnoxious statements about the movie American Sniper. He eventually backtracked a bit – but over the weekend, he came back with a vengeance.

Via Ace of Spades: Michael Moore: When You Think About It, I’m the Real Hero, Not That Coward Chris Kyle

The other weasel nominees have their work cut out for them, I think.

JoshuaPundit: Jah, he ist yus followin’ der orders, but doing it oh so efficiently, so like the soulless bureaucrat rat he is.

The DHS is supposed to protect American security at home, but how can they do that when politics from the White House forbids them to act?

Last week, the story broke about brand new directives issued to border patrol agents by Jeh Johnson and his functionaries on apprehending illegal aliens. Essentially, it’s not supposed to happen unless the agents actually see a violent crime in progress, know for a fact that the illegal migrant is a violent criminal or get specific orders from their superiors:

The training materials, when coupled with a November 20, 2014 memo on prosecutorial discretion from Homeland Security Secretary Jeh Johnson, indicate that agents should primarily only arrest someone who they directly see cross the border, if they are a wanted criminal, a convicted felon, have an extensive or a violent criminal history, or otherwise pose a national security or public safety threat.

The majority of other illegal aliens cannot be detained or deported without specific approval from leadership.

The source clarified this and said, “Nothing says don’t arrest, but it clearly says don’t waste your time because the alien will not be put into detention, sent back or deported. There is literally no reason to arrest an illegal alien because they are specifically telling Border Patrol there will be no consequence for the illegal alien. It is a waste of time and resources to arrest someone who is off limits for detainment or deportation and the documents make that fact clear. Border Patrol agents are now being trained to be social workers, not law enforcement.”

The Jeh Johnson memo further illuminates the intention behind the leaked training materials and exactly how broad the “not a priority” category is intended to be. Johnson wrote:

As a general rule, DHS detention resources should be used to support the enforcement priorities noted above or for aliens subject to mandatory detention by law. Absent extraordinary circumstances or the requirement of mandatory detention, field office directors should not expend detention resources on aliens who are known to be suffering from serious physical or mental illness, who are disabled, elderly, pregnant, or nursing, who demonstrate that they are primary caretakers of children or an infirm person, or whose detention is otherwise not in the public interest. To detain aliens in those categories who are not subject to mandatory detention, DHS officers or special agents must obtain approval from the ICE Field Office Director.

The source said, “This is not how it was before. Border Patrol used to arrest, process, and turn the illegal alien over to Immigration and Customs Enforcement (ICE) and the courts. Under this new program, the majority of illegal aliens will be released directly from the Border Patrol with no appointments or expectation that they ever have to show up for a hearing.

“Before these changes, all illegal aliens arrested by Border Patrol were required to enter the deportation system where they would be scheduled for a deportation hearing at a future date. Under this new system, the illegal aliens are not even required to show up for a hearing ever. Not only are we releasing these people with no hearings scheduled, no notice to appear, but the DHS [Department of Homeland Security] is forcing Border Patrol to prepare the initial paperwork for the illegal aliens’ work permits.” The source added, “Americans really need to think about the terrorism-related implications of this. Illegal aliens who are suspected of having terrorism ties, but not convicted, could be permitted to stay in the country.”

Essentially, we no longer have border control. And don’t think it’s just Mexicans and Central Americans looking for work and those lovely social welfare benefits that know that. Others will exploit it and America will pay dearly for it.

Ask Marion: I will have to go with Coach Bill Belichick and Coach Pete Carroll and the system(s) that supports cheaters in the football arena: ‘CheaterGate’ as I like to call it. In Carroll’s case his infractions started at USC. I wrote about this in greater detail in my entry for the Watcher’s Forum.

As I wrote… Perhaps the bigger question the media, who have been obsessed with the ‘deflated balls’ and DeflateGate this past week should be asking is: Which NFL Super Bowl XLIX (49) coach is a bigger cheater Bill Belichick or Pete Carroll? Both these coaches have a long list of violations and breaches of ethics to answer for.