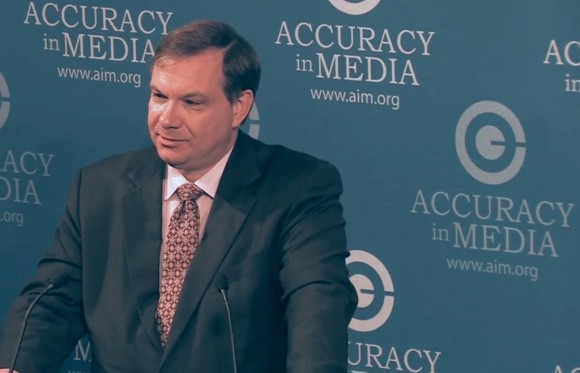 The issue of voter fraud is on the minds of many, as we are less than 30 days from the presidential election. John Fund has been one of the nation’s most prolific writers and commentators on the subject, and recently spoke at Accuracy in Media’s conference, “ObamaNation: A Day of Truth.”

Fund refutes what he refers to as “the constant mantra we hear from the critics of voter integrity laws, and that is ‘There is no voter fraud. It’s not a problem.’ All of these efforts, whether they be voter ID laws, whether they be cleaning up absentee ballot procedures, cleaning up voter registration rolls, are unnecessary. They’re a solution in search of a problem. There is no voter fraud.”

In his speech to the conference, and in his latest book, Who’s Counting? How Fraudsters and Bureaucrats Put Your Vote at Risk, co-authored by Hans Von Spakovsky, Fund cited numerous examples which put the lie to the narrative.

Fund has written many articles about electoral irregularities for The Wall Street Journal and The New Republic. Currently he is the national affairs columnist for National Review magazine and a senior editor of The American Spectator. He’s also a frequent commentator on cable news networks such as CNBC and Fox News. In 1995 he became a member of the Journal’s editorial board where he served until turning to the role of columnist on opinionjournal.com. He also worked as a reporter for the syndicated columnists Evans and Novak.

One very recent example of voter fraud that he cited in his talk was that of a Democratic congressional candidate who had to resign because she had voted in both Florida and Maryland in four separate elections at the same time. But, as Fund explained, “There is no voter fraud.”

He said that the Justice Department refuses to properly enforce the laws or investigate the irregularities. “This Justice Department is no longer a Justice Department. It is the Ministry of Propaganda,” he said. And he pointed out that the current occupant of the White House used to be a lawyer for ACORN, the community organizing group infamous for its well-documented history of fraudulent voter registration tactics.

Watch John Fund’s full speech below, or watch it with the transcript here:

3 thoughts on “No Voting Fraud? Not so, Says John Fund at AIM Conference”