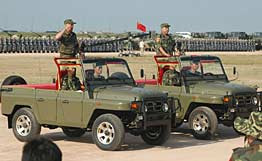 The exercise will take place in the first half of August in the Chelyabinsk region, the Urals, with about 5,000 servicemen from Russia, Kazakhstan, Tajikistan, Kyrgyzstan, China and Uzbekistan under the auspices of the Shanghai Cooperation Organization (SCO).

Established in 2001 as a non-military alliance, the SCO initially set dealing with Islamic extremism and other security threats in Central Asia as its goal, but has since expanded its scope to include cooperation in disaster relief and trade.

The SCO never held a full-scale military exercise involving all its member states, but Russia and China have already held several military joint exercises within the framework of the organization, including the Peace Mission 2005 exercise.

During the August exercise, Russia and China will deploy 36 and 46 aircraft, respectively. Both countries will contribute six Il-76 military transports each to perform simulated airborne assaults.

The group, which comprises Russia, China, Kazakhstan, Kyrgyzstan, Tajikistan and Uzbekistan, is largely viewed as a counterweight to NATO in the region. The organization also lists Iran, Pakistan, India and Mongolia, which have observer status.

Russia’s Security Council Secretary Igor Ivanov said in May that the organization, which is often referred to as the Shanghai-Six, focuses on fighting drug and arms trafficking, terrorism and separatism, and has never intended to become a military bloc.

1 thought on “Russia and China’s Not Military Alliance”