With Greece edging closer daily to communist led revolution, the Communist Party USA has issued a statement in support of their Greek comrades. 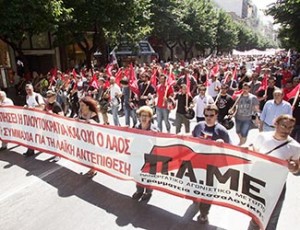 We, like many around the world, have been inspired by the magnificent struggle the Communist Party of Greece and its affiliated PAME union, the rest of Greek labor and the Greek working class and people have mounted against the aggressive, vicious offensive of monopoly capital and its political tools in Greece, Europe and beyond.

The austerity program just passed in the Greek parliament is a reactionary measure designed to shift the burden of the economic crisis onto the backs of workers, farmers and the poor, while protecting the super rich from suffering the consequences of their criminal greed.

That your Party, and Greek workers, have been willing to take to the streets in such numbers and with such tenacity and courage, in opposition to this austerity program, is to your credit and that of the whole working class of your country.

In the United States, we are heavily engaged in the same struggle. Here, monopoly capital is on the offensive in an effort to roll back all gains by the working class since the 1930s. While state governors (mostly, but not all, from the Republican Party) have launched a determined campaign to strip workers, especially those employed by public entities, of their most elemental labor rights, monopoly capital is trying, via its political enablers, to use the financial crisis to attack Social Security (the government pension program), public health and other essential programs the people have fought to attain. And we are happy to report that American workers, also, are taking to the streets in numbers unprecedented in recent history to resist this offensive by monopoly capital.

This is a worldwide fight, as we note from events in Portugal, Spain, the United Kingdom and many other countries. The enemy is the same, and the fight is the same. Victory can be won by building greater and greater working class unity in struggle, all over the world. Your fight in Greece is an inspiration for all.

Clearly the Communist Party USA and Glenn Beck agree on one point.

The revolutions that began in Egypt are spreading to Europe and to the United States as well.

4 thoughts on “US Communists Back Greek Comrades”

Are You A Victim Of Quiet Quitting?
2022-09-26  0 Comments
By: Denise Simon | Founders Code Customer service, support, and quality across the country regardless of the industry is collapsing. Whether...